The 29-year-old played a starring role in the victory over Sunderland.

Finally, after three attempts, Mile Jedinak can add “captained a team to a Premier League win” on his CV after Crystal Palace’s first Premier League victory of the season.

As has been the case in the Eagles’ previous two matches the Socceroos enforcer was terrific at Selhurst Park as Ian Holloway’s men beat Sunderland 3-1 to extinguish the disappointment of defeats to Tottenham and Stoke in consecutive weeks.

Operating in his defensive perch just in front of the back four, Jedinak was the most influential presence for his side yet again and defined his role as their midfield axis with a 75% pass success rate (46/61), a majority emanating from the middle defensive third of the pitch. 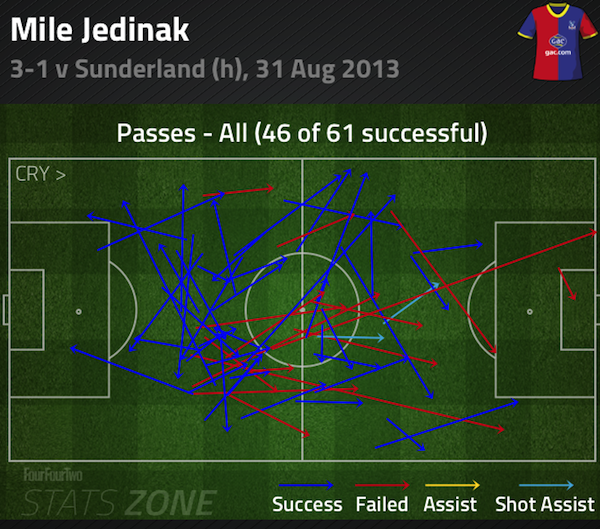 In terms of defensive work the 29-year-old excelled once more by making eight recoveries – only matched by visiting left-back Jack Colback – and proved impenetrable in and around the home penalty area by achieving a 100% success rate for clearances (5/5) and coming off on top in 6 out of 7 aerial duels.

Remarkably, despite completing 6 of the 9 tackles he attempted, Jedinak didn’t commit a foul across the 90 minutes, indicating an outstanding talent for cleanly nicking the ball away from an opponent.

One aspect of his game that did show improvement was his chance creation, setting up two opportunities for his team-mates, while also chancing his own hand with two strikes from long-range.

It’s certainly becoming apparent just how pivotal Jedinak will be to Palace’s chances of breaking their habit of falling back into the second tier of English football following a brief year-long flirtation with the Premier League.