Key forward to stay at AFL club for another three seasons.

The Richmond Tigers have secured the services of forward Jack Riewoldt for the next three years, after he signed a new deal with the club today.

Riewoldt will now stay in black and gold until the end of the 2016 season, in what is a major building block as the Tigers look to continue their rise up the AFL ladder.

The news a crushing blow for Fremantle who were very interested in the 24-year-old after they missed out on the signature of Collingwood’s Travis Cloke last year.

Despite the rich offer coming from the Dockers, Riewoldt said he never had serious intentions of leaving, as the club prepares for its first visit to the finals since 2001.

“I genuinely love this football club and all it stands for, and I’m pleased to be part of the journey we’re on,” Riewoldt said.

“I hope to repay the faith shown in me by the club, and I’ll continue to give everything I have for the cause.”

Riewoldt has kicked 47 goals this year, more than double the Tigers’ next best, Jake King and Dustin Martin (18).

Riewoldt is third in this year’s Coleman race and 10th on the club’s goals records tally, with 309 majors from 128 games.

The fact the club has been able to keep Riewoldt and Ivan Maric and Troy Chaplin while not going over the salary cap has been, in large part, due to the change in fortunes at the club.

The only big names left currently without new deals at the club are superstar pair Brett Deledio and captain Trent Cotchin, who will be next in the club’s sights as they aim to keep the current playing together.

Richmond will have a tough test of their premiership credentials this season, when they tackle the flag holders Sydney at the SCG on Sunday. 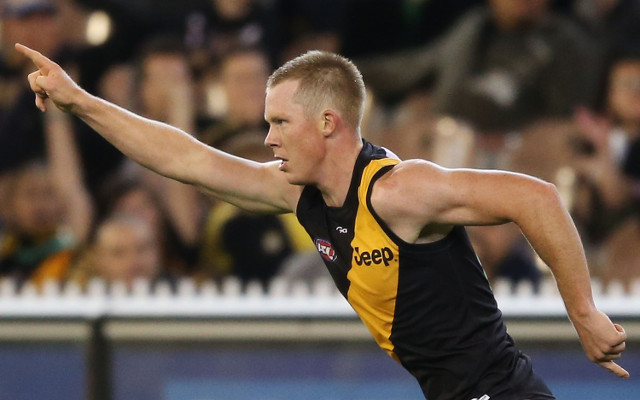