The Chicago Bulls were eliminated from the playoffs by the Cleveland Cavaliers yet again on Thursday night, and a fan opted to have some fun with it.

The Bulls were 2-1 up in their Eastern Conference semi-finals match-up with the Cavs this year, but after surrendering a strong lead in Game 4 which resulted in LeBron James hitting a game-winner at the United Center, the series got away from them thereafter.

After losing in Cleveland in another close encounter on Tuesday night, they were embarrassed by the Cavs at home on Thursday which sealed a 4-2 series win for James and Co.

Given that it was the fourth time in the last six post-seasons that the 30-year-old has eliminated the Bulls from the playoffs, there is certainly something at hand with Chicago being unable to contain him and his teammates.

That in turn led to a change being made to the Bulls wikipedia page, with James being listed as the ‘owner’ of the organisation. Based on their record against him, the Bulls have undoubtedly been ‘owned’ by the King over the last five years, although this one will hurt more as the series was there for the taking.

With Kevin Love sidelined with a shoulder injury and Kyrie Irving struggling with his own issues, Chicago were unable to take advantage and slumped to a disappointing series loss.

Questions will be asked of coach Tom Thibodeau’s future and rightly so, but one thing that is clear is that James is obviously not the official owner of the franchise no matter how much he continues to dominate them. 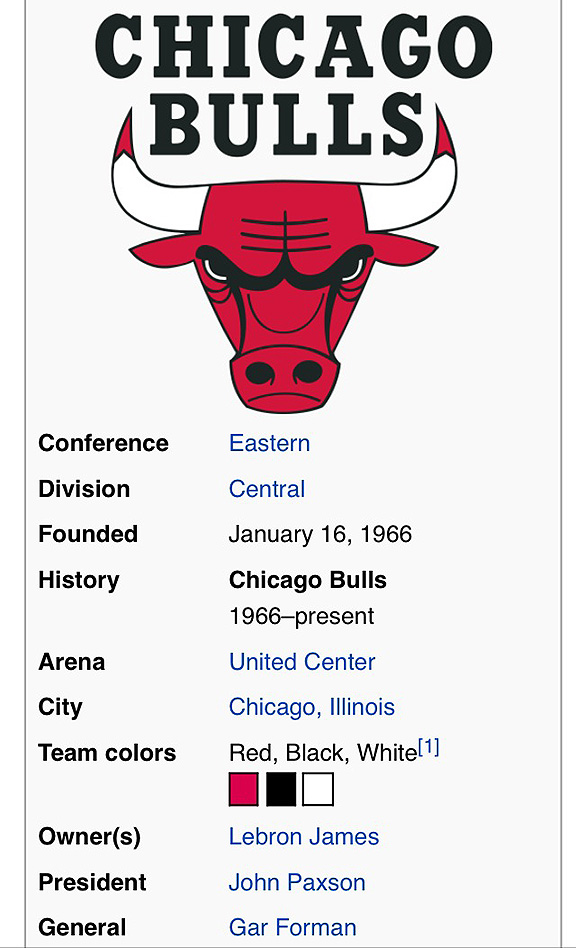