Poll also reveals most hated teams in each US state…

The NBA has its fair share of pantomime villains, but this simple poll has revealed which teams have earned the disdain of each continent around the globe.

Meanwhile, the results of each US state have also been made available thanks to a Reddit user conducting a poll asking two basic questions: 1) Which state are you from? and 2) Which NBA team do you hate the most?

It is worth noting that 42,067 responses were received so the findings aren’t exactly conclusive, but ultimately it does give an indication of which teams are disliked in the NBA.

The worldwide results are particularly interesting, as generally speaking there is no reasoning behind Africa’s hatred for the Oklahoma City Thunder, nor Australia’s problem with the Los Angeles Lakers.

It is presumed that the Houston Rockets’ treatment of Jeremy Lin explains Asia’s results, but it is clear that the Miami Heat have still irked many people despite LeBron James now returning to the Cleveland Cavaliers.

In addition, it is pretty clear that everyone just loves the San Antonio Spurs… 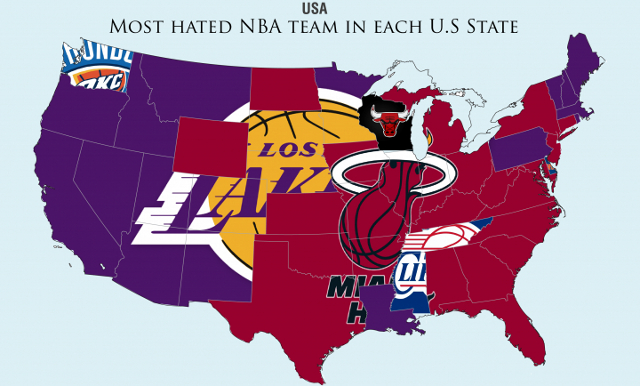