Oklahoma City Thunder star Kevin Durant is a mean guy these days as after his recent media rants, he hit back at a troll on Instagram on Saturday.

READ MORE:
Durant sidelined by foot injury again: OKC star will be out for two weeks.
Durant regrets his media attack: Thunder ace sorry for outburst.
Durant lashes out at NBA media again: KD has been in a volatile mood over All-Star break.

Durant is currently sidelined after undergoing a procedure on his surgically repaired foot, and in his absence Russell Westbrook has been in unstoppable form.

The point guard has averaged a triple double in the seven games that Durant has missed, and as a result his name has now been mentioned in the MVP conversation.

While the reigning MVP was merely posting a motivational quote on his Instagram account, a troll took the opportunity to let him know that he thought Westbrook is better than him.

Given Durant’s recent outbursts to the media, this probably isn’t the best time to annoy him and so he dished out a response that ended the conversation as seen below. 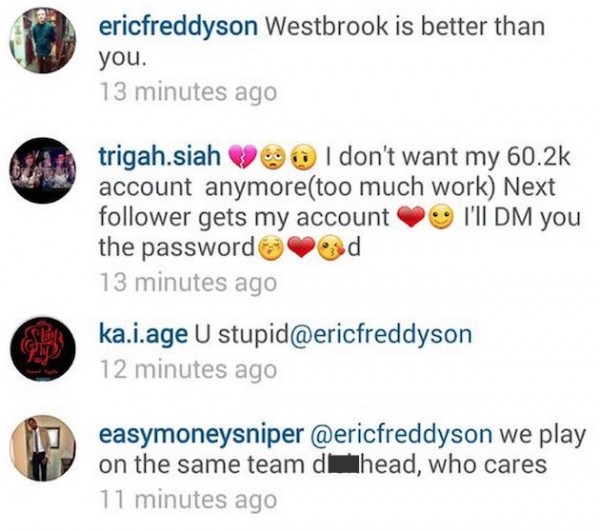 Durant later deleted the post entirely as he continues to show a different side to his personality, and even though he apologised for his rant at the media during the All-Star break he is certainly acting differently this year.

The 26-year-old has established a positive reputation with the media throughout his career after being polite and open with them in the past.

However, constant criticism of the team and coach Scott Brooks forced him to lash out a fortnight ago and it is clear that he is ready to take a no-nonsense approach to matters moving forward.

Nevertheless, he does make a valid point and the argument over who is better is irrelevant provided that the Thunder win games and make the playoffs.