Thiago is snubbed by the photo editors at the Nou Camp.

Barcelona give their biggest indication yet that Spain under-21 captain Thiago Alcantara will be sold to Manchester United after cutting the midfielder out of their team photo. 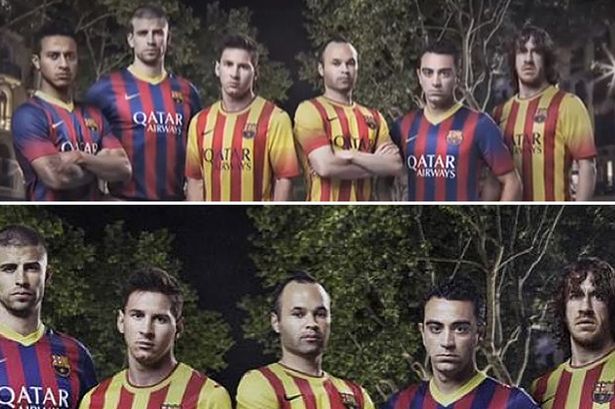 Now you see him, now you don’t – photo courtesy of the Mirror.

The 22-year-old has been strongly linked with a switch to Old Trafford for some time and it seems the Catalans are preparing for his departure by cutting Thiago from this photo-shoot.

It’s thought the Spaniard was after a move from the Nou Camp having not been given enough first team opportunities due to the presence of players such as Xavi, Sergio Busquets and Cesc Fabregas at the club.

United meanwhile need to replace the retired Paul Scholes and would be able to land the midfielder at a snip of the youngster’s expected price, due to a clause in Thiago’s contract stating he can leave for £17m if not enough game time is achieved.

The starlet has been impressing critics across Europe for his confident performances on both the international and domestic stage.

Under Thiago’s captaincy the Spanish under-21s side triumphed at the European Championships in Israel, beating Italy 4-2 in the final and the Barca man scoring a hat-trick.

It looks as if Red Devils fans can expect the Spain international to be in a picture similar to this in Manchester very soon – with the midfielder included this time of course!