Underdogs push Wellington to the brink of an upset victory.

The Wellington Hurricanes notched a hard-fought 22-16 victory over the Western Force in the Super 15 competition Friday, against the unfancied but committed Australians.

The injury-hit Hurricanes scored three tries to one but had to battle until the final whistle as Jayden Hayward’s boot kept the Force in the game with three penalties.

“We were working really hard but obviously missing some leaders within the team,” captain Conrad Smith said. “It wasn’t pretty but we’ll take a win, she’s a tough competition.”

The Force, fresh from an upset win over seven-time champions the Canterbury Crusaders last week, dominated early possession but could not make it count against the Hurricanes’ defence.

When the home side finally got the ball, fullback Beauden Barrett and winger Alapati Leiua both butchered tries with last minute mistakes on the line before prop Jeff Toomaga-Allen made the breakthrough after 20 minutes. 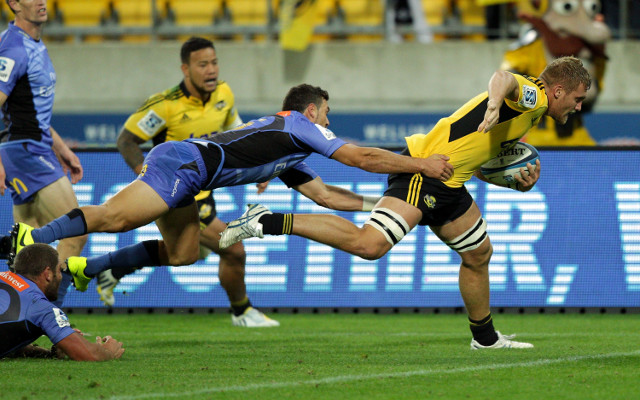 Former Hurricane Hayward put the Force on the board with a penalty but Leiua then pounced on a poor kick from the West Australians, racing from deep within his own half then offloading to Brad Shields for the Hurricanes second try.

The Force narrowed the gap with another penalty just after the break but the Hurricanes bounced back with a try from Tusi Pisi two minutes later after a well-executed build-up that stretched the visitors’ defence on both wings.

Alby Mathewson, another ex-Hurricane, showed some slick evasive qualities to dance around the Wellington defence for a try, making it 22-13.

A penalty brought the game within a converted try after the Hurricanes were reduced to 14 men for the final 10 minutes after James Broadhurst was sinbinned for foul play, but the Force could not find a way through