Twenty-two-year-old Aron Johannsson has made himself eligible for selection with the USA National Football Team.

AZ Alkmaar striker Aron Jóhannsson has recently announced his decision to make himself eligible for the USA National Football Team, via his facebook page.

The 22 year-old is one of the most exciting young players in the Eredivisie, and has scored 3 goals for the club so far.

He signed for the Dutch club after impressing in the Danish Superliga with AGF Arhus, scoring 21 goals in his last season with the Danish Club. He became a club sensation after scoring the fastest ever hat-trick in the Superliga, netting three in 3 minutes 50 seconds against AC Horsens. 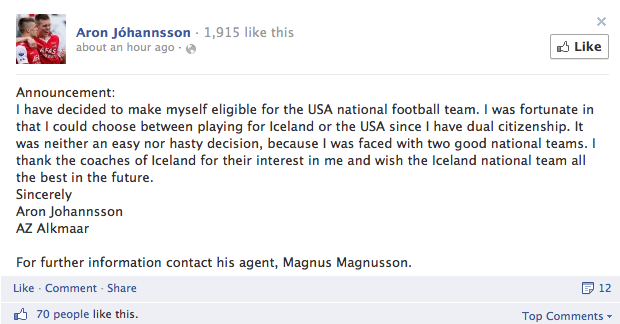 USA Head Coach Jurgen Kilnsmann has previously stated his interest in the young striker, saying he was keeping “a very close eye” on him.

Happy to hear @aronjo20 is going with USA. Such a quality player, fans and players will love him. Welcome bro. #USMNT

The ten most injury prone players of all time, unfortunate Arsenal trio all feature