Hawthorn have shown they are again one of the teams to beat this AFL season with a classy 46-point victory against the Essendon Bombers at the MCG.

The top-of-the-table clash was billed as a possible grand final preview, however, the premierships aspirations of the Bombers may be called into the question after the 22.11 (143) to 13.9 (87) loss.

While there were never blown off the park or outclassed, they looked a step behind the more mature Hawks, who dominated uncontested possessions throughout most of the game.

Lance Franklin and Jarryd Roughead again proved to be the potent forward combination in the competition, with the pair kicking 12 goals, eight of which came from the returning Franklin.

Tom Bellchambers got the best of Luke Hodge in an intriguing  match-up early, with the Essendon ruckman scoring the first goal for the Bombers.

David Meyers scored quickly again for the Bombers as they most of their chances in a frenetic start to the game.

In a sign how close the game was early Jordan Lewis kicked around the body after working hard around the contested football to kick the Hawks’ first for the game.

The Bombers were able to move the ball well off their half-back flank much easier than the Hawks, as they caught the Hawthorn defenders on the hop. 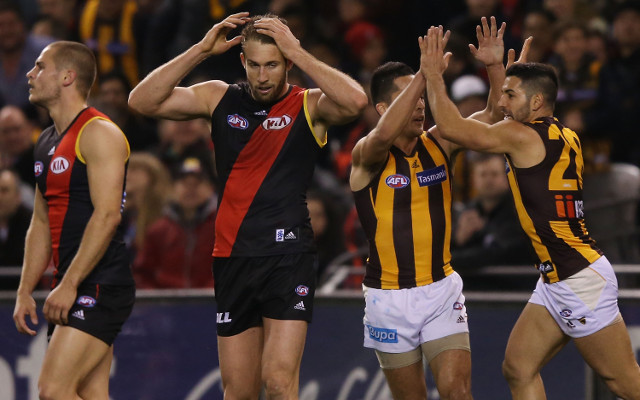 Franklin kicked his second for the term after Jarryd Roughead crumbed well as the game continued to see-saw.

Hawthorn hit the front when Franklin continued his amazing run against the Bombers as he kicked his third in what was an explosive opening term.

In what is only the fourth time in his career Franklin kicked three for the first term tipping what was to come.

A goal on the siren by the Hawks gave them a important 10-point lead at quarter time. 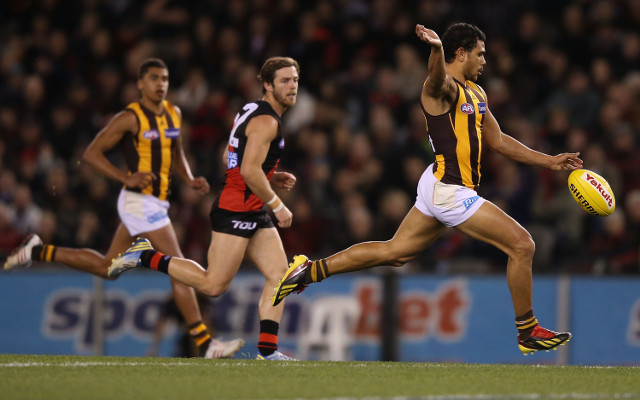 The second quarter did not slow down from either side but adjustments by both sides saw better match-ups across the ground, slowing the rate of scoring.

Sides traded goals as the game continued to live up to the hype, however, the Hawks began to pull away as they captalised on their quality possessions as they pulled the lead out to 31 points.

Cyril Rioli was huge for the Hawks through the first half as he injected himself into the game as his side dominated field position.

Travis Colyer goaled for the Bombers early in the third but it was still a long way back for his side.

Hawthorn continued to pull away with goals to Lewis and Paul Puopolo and David Hale as the Bombers struggled to contain the run from their opponents.

The maturity of the Hawks continued to show through as the Bombers battled away, but failed to rattle last year’s grand finalists despite the game getting fiery. 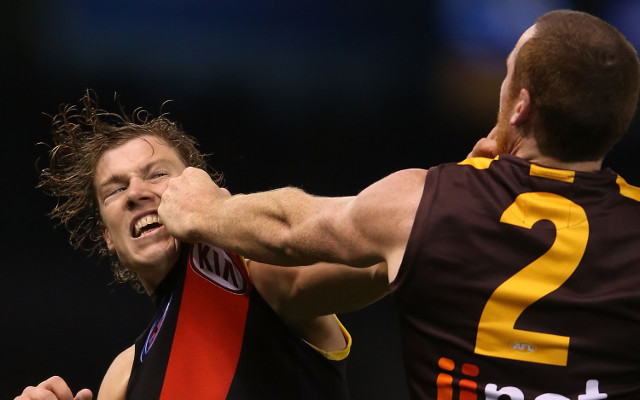 Alistair Clarkson’s men had a chance to put the nail in the coffin for Essendon’s chances, but a couple of misses kept them Bombers hanging on by a thread.

A vital goal to Brendon Goodard for Essendon kept them in touching distance as they narrowed the gap to 34.

Every time the Bombers looked to be mounting a comeback the Hawks would snuff it out just as quickly as they lead by an amazing 46 points.

The night got worse for Essendon when Jake Melksham was reported for rough conduct on Roughead after a hit to the head off the ball.

Hawks had their own concerns when Daniel Gibson looked shaky on his feet after being hit by teammate Ben Stratton while attempting to spoil a mark and he was taken from the field.

Hurley kicked his third for the game, in what was his fourth shot on goal for the final term, but it was largely too little too late for the Bombers.

Summing up the game, Franklin kicked his sixth for the night after Sam Mitchell played on quickly as they ran out convincing winners.