Hawks had an answer for every question asked of them by the premiers.

Hawthorn showed they have put the demons of last year’s AFL grand final loss behind them after cruising to a 37-point win against the Sydney Swans at the MCG.

With the pain of last year’s finale still fresh in their minds, the Hawks jumped out of the blocks quickly in the first quarter and did not look back as they secured the 18.11 (119) to 12.10 (82) victory.

Despite the size of the final margin the Swans never threw in the towel and again exhibited the fighting spirit that has made them a tough side to keep down.

But four goals and 27 disposals to Jarryd Roughead and 32 touches and a major to Luke Hodge helped tip the game in the favor of the home side. 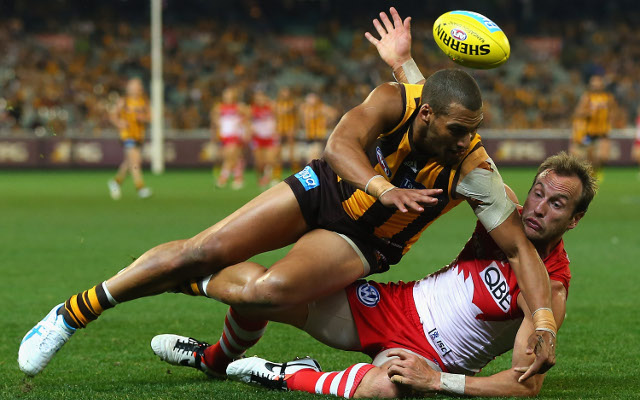 Lance Franklin scored the first goal for the game and his personal first for the past three weeks, putting the bed the talk of his drought very quickly in the clash.

Jack Gunston scored the Hawks second as he snapped well from the front-left pocket and before long the Hawks were on fire, with Franklin kicking his second after Hawthorn
got the quick clearance.

Max Bailey scored his side’s fourth of the term and the Hawks opened up a handy 22-point lead
despite the Swans placing plenty of pressure on the ball-carrier.

Luke Breust continued the electric start by the Hawks by bagging his side’s fifth major for the
term, with the game showing remarkable similarities to last year’s grand final.

Sydney attempted to try and strangle the Hawks’ forward line and then rebound quickly, but the
home side made the most of every chance in their forward fifty. 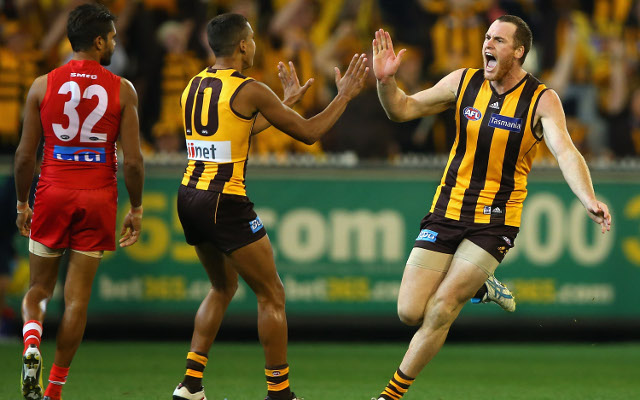 Mike Pike provided a handy target for the Swans when they are able to get the ball into their forward fifty, with the ruckman kicking his side’s first goal with just over two minutes left in the first quarter.

Hawthorn again exploded out of the blocks to score two quick goals through Roughead and Franklin, his third, as the lead started to get out of control for the Swans at 35.

Sydney steadied the ship through goals to Ryan O’Keefe and Ben McGlynn as the Swans started to get their fair share of the ball.

But Hawthorn snuffed out the run of goals by their opponents with slick hands leading to a shot on goal by Gunston for his second for the game.

Sydney were unable to get any deep entries inside their attacking fifty, with Josh Gibson outstanding at the back for the Hawks.

At the end of the second term it was the Swans who finished full of running but still faced a 40-point deficit at half-time.

A Luke Hodge goal early in the third term was the perfect start for the Hawks, who knew if they
opened the door slightly for the Swans, the premiers would fight their way back into contention.

Sydney finally scored its first goal of the third through Ben McGlynn with 13 minutes gone after several wasted chances before it. 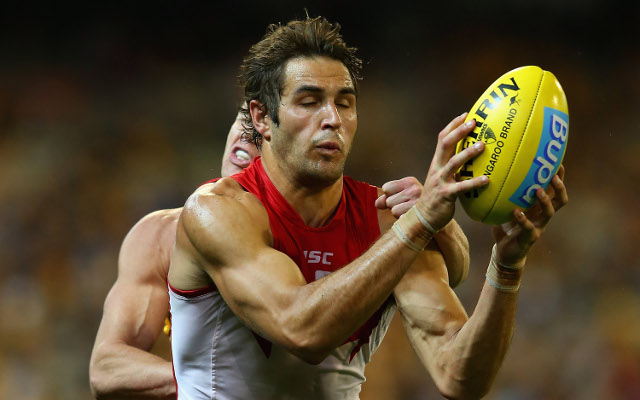 The game then became an torrid arm-wrestle as neither side was able to generate shots on goal with what little possession they were able to string together.

David Hale kicked two goals late to take the margin back out to 41 at three-quarter time for the Hawks as all the work to do was in front of the premiers.

Hawthorn got the perfect start to the third when Hale kicked his third of the game as the Hawks
continued to have all of the answers.

Sydney had a moment to celebrate when substitute Jed Lamb kicked his first AFL goal, as he bombed away from beyond fifty.

Roughead kicked his sixth for the game to make the margin 42 to all but seal the game in front of more than 50,000.

However, Sydney continued to push forward as they kicked back-to-back goals thanks to Jesse White and Adam Goodes to take the margin back to 30 which was the closet Sydney had been since the 22 minute mark in the second term, but it would be too little too late.