Home side turn on the fireworks in a stunning clash against another flag contender.

The Hawthorn Hawks have run out convincing 58-point winners against the other side many have tipped win the 2014 premiership in the Fremantle Dockers, sending out a message to the rest of the competition.

In a stunning first quarter, the Hawks showed why they are again one of the teams to beat as they torched the visitors to open up an unassailable lead, before winning 21.11 (137) to 11.13 (79) at the MCG.

David Hale celebrated his 200th AFL game and 71st first for the Hawks, despite picking up a shoulder injury scare later in the game.

Early in the first quarter and out of nothing, the Hawks were on the board first as Cyril Rioli scored  great roving goal to see them lead early and Hale celebrated his milestone game with a solid goal from 50 metres out.

Fremantle struggled to get their hands on the ball early but several smothered kicks across the Dockers right-wing saw them slowly creep into the contest.

The football gods continued to smile on the Hawks as Jarryd Roughead crafted a goal out of nothing, emerging from a pack and benefiting from a kind bounce  as the home side earned a serious lead of 19.

Fremantle failed to win much, if any, of the contested possession early in the game as their normally stingy defence gave up three goals in a quarter for the first time this season.

The stunning scoring spree early to the game saw the Hawks add a fifth as they controlled the ball well and used it, with the side deadly in front of goal as they took a stranglehold on the game at 5.1 to nil.

Hawthorn continued to turn on the fireworks with an amazing rebound effort that went the length of the field with Freo botching a chance at goal before Luke Breust added his second for the term. 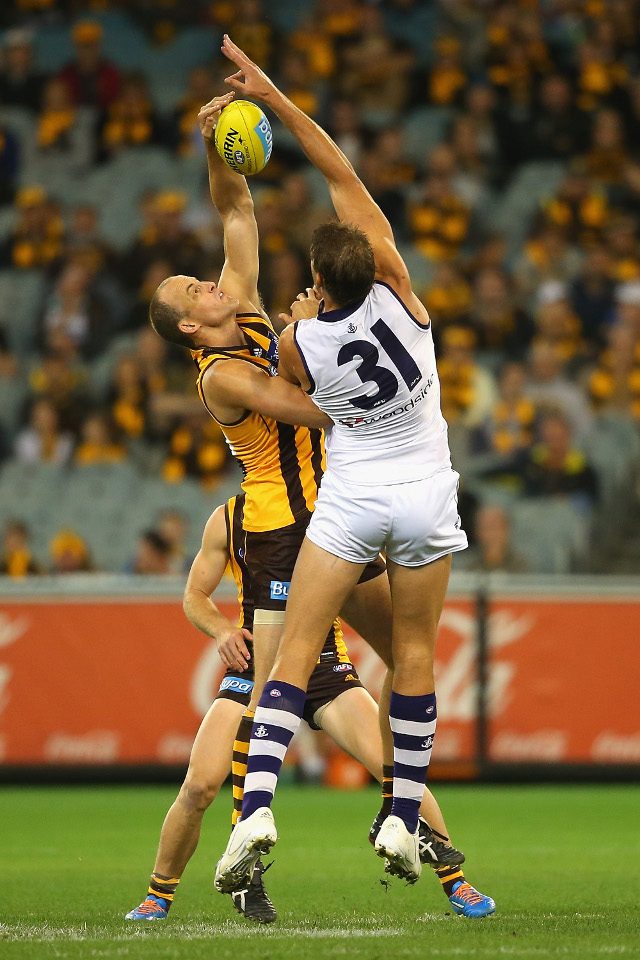 As if to sum up their quartet to date, David Mundy had an easy shpt at goal for the Dockers only to see the ball hit the upright to narrow the margin to a still hefty 36 before Matthew Pavlich scored his side’s first goal for the night to soften the blow a fraction.

Garrick Ibbotson was in trouble near the end of the first quarter for the Dockers with a dislocated shoulder, and he was forced from the field for treatment after medical staff attempted to put the joint back in on the field.

As a result, the away side activated their sub with Tom Sheridan coming onto the field with time running out in the first quarter, as the home side enjoyed a healthy 30-point lead.

Hawthorn continued the second where they left off in the first term as Hale delivered a well-weighted pass to Issac Smith, who scored two quick goals to undo much of the good work by the Dockers at the end of the first term.

Pavlich again stood up when his side desperately needed him by kicking his second for the game, but the margin was still at 36.

However, the Hawks continued to belt the 2013 runners-up as the margin grew with 10 goals coming at 23 inside-50s as Will Langford kicked his first goal in the AFL.

Fremantle started to feel the pressure in defence as they struggled to maintain control of the game as the ball continued to be bombed into their area with the margin now, potentially, a match-winning one at 51 with less than five minutes to the long break.

Roughead kicked his second goal for the game as the Hawks matched their points total in the 2013 grand final against the Dockers, as they hit 77-20 in the shadows of half-time. 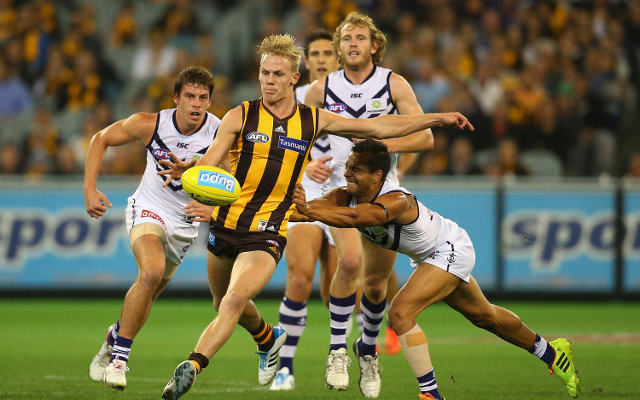 The first-half performance of the Hawks saw them unafraid to kick to a contest, with the targets able to muscle their way to the front of the resulting pack.

Pavlich kicked his third for the game, as he continued to be his side’s only goal-scorer soon after the resumption

Rioli showed just what he can do on his own, as he took a special mark in a pack before quickly playing on and snapping on his left to extent his side’s margin.

While the Dockers had their own injury worries from the game, Hale came from the field for the Hawks looking in serious trouble with a right shoulder injury.

Gunston scored his second for the term as the margin became a stunning 70 points, as the game
was all but over as a contest.

Freo kicked their fourth for the game with five minutes remaining in the third term, with Haydn Ballantyne becoming the first player not named Matthew Pavlich to bag a major.

A goal to Luke Bruest saw the Hawks complete another dominant quarter as they earned a 69-point buffer against one of the sides rated as a fellow favourite to win the flag this year. 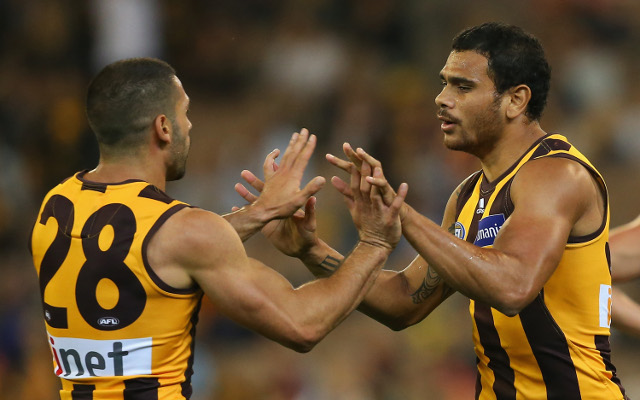 Bruest and Issac Smith combined to goal to start the fourth quarter as the mauling continued unabated as Ross Lyon edged towards his biggest loss as a coach.

Fremantle had a late rally as they kicked two goals in a row, but the result was beyond doubt with plenty of time to play.

Pavlich continued his solid game in a easily beaten side, ensuring he kicked a goal in every quarter, but it was a consolation effort at best given the final margin.