Harry Kane broke his Tottenham Hotspur duck for the season with the third in a superb 4-1 win for Mauricio Pochettino’s side over Premier League leaders Manchester City.

The England striker, who scored 31 goals for Spurs last season, ended an eight-game drought with an instinctive finish after Christian Eriksen’s 61st-minute free-kick rebounded off the crossbar.

The 22-year-old appeared to be in an offside position, as was Kevin de Bruyne as he scored City’s opener, and Kyle Walker in the build-up to Eric Dier’s equaliser on the stroke of the break.

Toby Alderweired and Erik Lamela were also on the scoresheet for the hosts in a win which takes them to fifth in the table, and inflicts a third straight defeat on the Citizens in all competitions.

Kane’s much-needed goal was enough to get him an 8/10 in our player ratings. Below, you can read how fanatix thought the rest of Mauricio Pochettino’s team performed at White Hart Lane.

An outstanding save at a crucial time in each half means that Tottenham’s skipper would be a contender for man of the match. Joe Hart missing at the other end showed just how important Lloris is to Spurs.

A really sloppy pass allowed City to break clinically for their first goal. Played a part in the build-up to Tottenham’s equaliser, although he was two or three yards offside at least.

Got above Fernando to head Tottenham level early in the second half, with some assistance from the stranded Willy Caballero. Also very good at the other end as Spurs restricted City’s second-half threat. 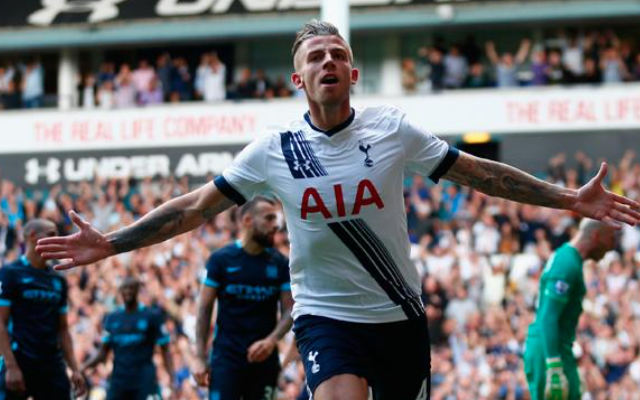 Has had a torrid time against Aguero in the past but continued his recent excellent form by keeping the Argentine very quiet in combination with his Belgian international colleague.

Faced several two-on-one situations in the first half as Eriksen left Bacary Sagna free to overlap down the City right, but defended really solidly as he continues to keep Danny Rose out of the team.