Storm come unstuck for the second week-in-a-row in the NRL.

The Penrith Panthers have caused the upset of the season to grind out a tough 12-10 victory against the the reigning premiers Melbourne Storm.

Off the back of their loss to the Canberra Raiders in round eight most expected Melbourne to bounce back to form at the expense of the Panthers.

But somebody forgot to tell Ivan Cleary and his men what the script was as they jumped out to an early lead, before hanging on as the inevitable Storm comeback occurred in the second half.

It was the first time the Panthers had beaten the Storm in eight years as Melbourne lost the top spot on the ladder to South Sydney.

Panthers lock Adam Docker, who earned man-of-the-match honors for his 21 tackles and 13 hit-ups, said discipline was key to the upset victory.

‘I’m just happy the boys just stuck to our game plan and we got the win,” Docker said.

“We just trained to hold our defence and I think we managed to slow down their ruck and I think that led to us winning.”

Melbourne prop Jesse Bromwich said the side will have to go back to basics after their second loss in as many weeks.

“We seemed to be a bit flat, and individually we are not playing to our ability and that’s pretty clear to see,”‘ Bromwich said.

“We needed a rev up after last weekend and we got one at half-time tonight but I’m sure
we’ll get another one during the week.” 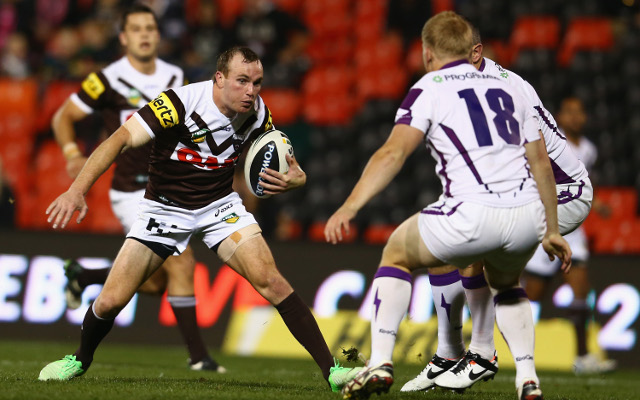 Against the run of play, David Simmons raced 80 metres to score the opening try for the home side as a result of the intercept pass to open the home side’s account.

Travis Robinson stretched out to score for the Panthers out wide soon after, and despite forensic examination by the video referee, the green light was given as the home side doubled its lead.

Melbourne were sloppy to start the game with several uncustomary mistakes coming out of their own half which heaped pressure on themselves.

As a result Simmons showed tremendous strength to finish off a movement on the left edge
to make it three tries in the first 25 minutes.

Luke Walsh continued to have an unhappy night with the boot for Penrith in missing his third conversion, but the home side had a handy 12-0 lead early. 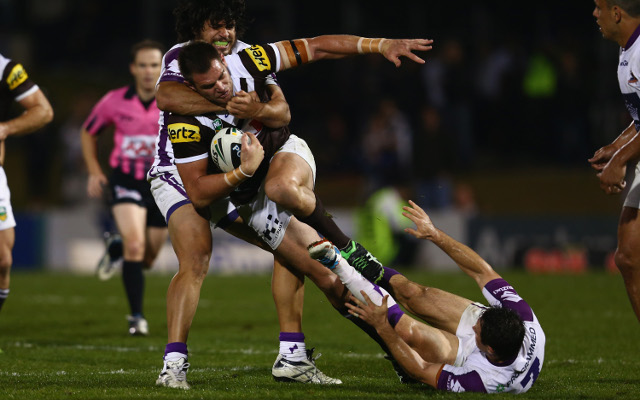 Storm completed just five out of 11 sets in the first half an hour as the Panthers set up camp in
Melbourne’s half.

Amazingly, Penrith prop Tim Grant ran for 119m in the first half and Simmons 154m as the Panthers enjoyed their dozen-point lead at half-time.

Melbourne needed to be the first to score after the break and they did so through Sisa Waqa, after he pounced on a spilled ball by Robinson to score an easy try to make it 12-4.

The Storm looked to pick up their support and second-phase play and it did not always work out for the premiers, as they often rushed their decision making. 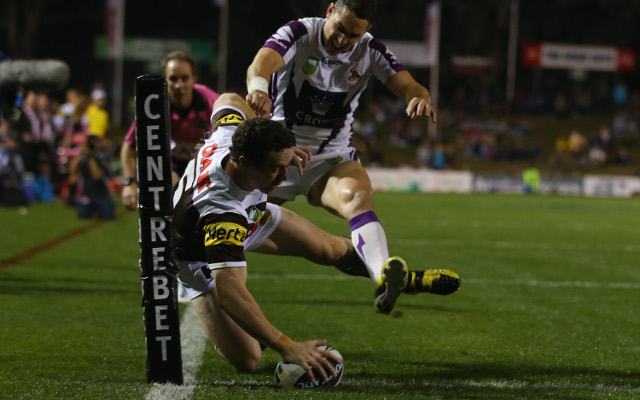 Simmons went close to scoring his third try for the game, but the video referee ruled the Panthers
winger lost the ball in attempting the ground the ball.

Melbourne scored through Bromwich after Panthers fullback Matt Moylan was ruled to have stripped the ball from Cameron Smith’s grasp in the process of him attempting to score.

Smith converted from in front to narrow the gap to just two and the premiers were back in the game.

Melbourne started to turn the screws on the Panthers with their defensive line speed making it nearly impossible to get out of their own half.

Penrith handed the Storm several enticing opportunities late in the game as they risked too much by running it on the last tackle.

But time ran out for the Storm to pull off the comeback win as the Panthers celebrated one of their gutsiest wins in recent seasons.