Rank outsider Auroras Encore caused a huge upset in the Grand National on Saturday as jockey Ryan Mania rode the long shot to victory in his first-ever race at Aintree.

Auroras Encore – who won by nine lengths – was a local win as one of the three owners Jim Beaumont is Liverpool-born and started his working life as a bellboy in the city’s upmarket Adelphi Hotel.

In a memorable renewal 17 of the 40 runners finished and most importantly for the racing authorities who had introduced sweeping reforms after four fatalities in the past two years there were none in this renewal.

Mania seized his chance when Teaforthree hit the last after looking set to give Wales their first National win since Kirkland in 1905.

He was never in trouble after that as Cappa Bleu, fourth last year, ran on to rob Teaforthree of second while Cheltenham Gold Cup winning amateur rider Sam Waley-Cohen produced another fantastic ride to take fourth.

“He gave me a dream ride, he’s brilliant. I had the choice of two horses to ride, I wasn’t sure which one to go for,” said Mania.

“He loved every second of it, just class – he was second in the Scottish National last season. He made a couple of little mistakes then learned from them.”

Sue Smith said that everything had colluded to give her runner every chance.

“You can ride him anywhere, anyhow, the ground was in his favour, he had no weight, Ryan gave him a fanstastic ride,” she said.

Husband Harvey added: “That was absolutely spot on.”

Asked how this compared to his show jumping days the 74-year-old told Channel 4: “You’ve got to look forward so this is the best, but unfortunately we’re all getting older.”

However, he was less sure about whether it would improve their marriage.

“We’re a bit antiquish for that aren’t we!”

Cappa Bleu’s trainer Evan Williams, one of a growing group of influential young trainers in Wales, has made a habit of training placed horses in the race but he was not disappointed with missing out.

“You can’t put into words what this race means to us,” he said.

“To finish second to legends like Sue and Harvey Smith is no disgrace.”

Katie Walsh’s hopes of becoming the first woman rider to win the greatest steeplechase in the world looked promising midway round the second circuit on 11-2 favourite Seabass.

Riding upsides brother Ruby, who was on second favourite On My Own, her mount was going easily.

However, while On My Own fell at the 25th Seabass kept on but rounding the turn to the straight the signs were out as he came under the whip and faded to finish 13th.

Indeed the strong Irish challenge rated as one of the strongest ever foundered completely, Treacle being the first faller but at the seventh fence while Rare Bob was the best of those that finished in fifth leaving them without a win since 2007.

While Oscar Time relished his return to the course after a couple of years fallow form the horse who beat him in the 2011 National Ballabriggs was never going well and was pulled up on the second circuit.

Manchester United manager Alex Ferguson’s duo What A Friend and Harry The Viking failed to replicate the confidence he had placed in them by backing them at long odds as they both never featured and failed to finish. 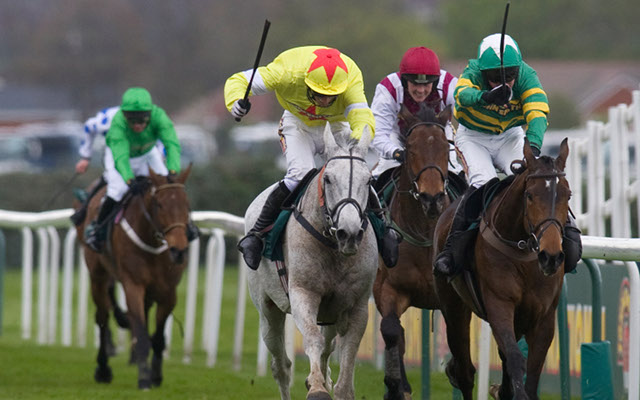