Storm without their stars due to State of Origin duty lacked direction.

The Gold Coast Titans have moved into fifth place on the NRL ladders after beating the reigning premiers the Melbourne Storm 18-12 at Skilled Park.

Melbourne, without their big names Cooper Cronk, Cameron Smith and Bill Slater, struggled to get into the game as uncustomary errors crept into their game.

Victory for the Titans ends their hoodoo of playing on Monday night but the news was nothing but bad for the Storm.

On top of the loss, just their third for the season, the premiers look set to lose key playmaker Gareth Widdop for an extended time after he dislocated his hip in the second half and was taken from the ground in considerable pain. 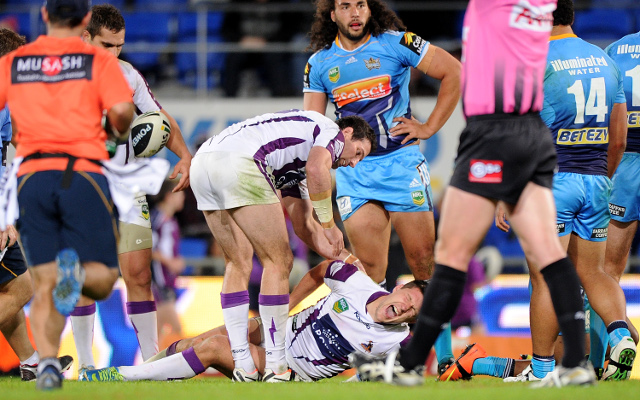 Gold Coast looked to have had a perfect start to the game when Anthony Don went close to scoring in the corner,only for the final pass being called forward by Jamal Idris.

Melbourne’s massive forward pack gave them good drive in the early going, as they surged up the middle third of the field.

Ben Hampton made his debut for the Storm at five-eighth looked very sharp in the early going, with his performance one of the highlights for the away side.

Neither team was able to apply significant pressure to their opponent’s try-line as the Storm felt their way into the game, minus their State of Origin stars.

Albert Kelly looked to have scored his 11th try of the season for the Titans when a grubber kick ricocheted off the upright.

But the video referee denied Kelly and the Titans first points in the game after he failed to
ground the ball correctly.

Despite the try being denied, Kelly was one of the best early for the Titans as he probed gaps in the
Storm defensive line and was a headache in attack. 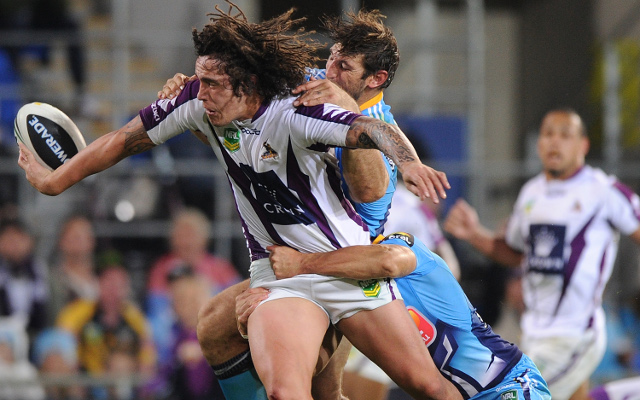 However, it was the away side who opened the scoring int he game first when they scored a long-range try, with Hampton scoring the first of a double

Gold Coast finally got some good news from the video referee as Kevin Gordon scored off a tap back from a bomb, as
the home side level it up.

Gold Coast were, at times, their own worst enemies as their ball control let them down, with six errors coming in under 30 minutes.

Whichever side controlled possession better and was able to apply pressure through line-drop outs would gain a massive advantage, as the sides went into the break deadlocked, despite a desperate effort from Gordon as the siren sounded.

The Storm then suffered a blow for the rest of the game, and perhaps much of the rest of the season, when Widdop was taken from the field in pain with what was initially diagnosed as a dislocated hip.

Soon after Anthony Don captalised on the space created by Jamal Idris as a result from a brilliant flick-pass as the Titans started to pull away from the visitors.

Hampton scored his second for the night off the back of a sizzling break by Will Chambers down the right wing, as the Storm climbed back into the game at 14-12 with 17 minutes left. 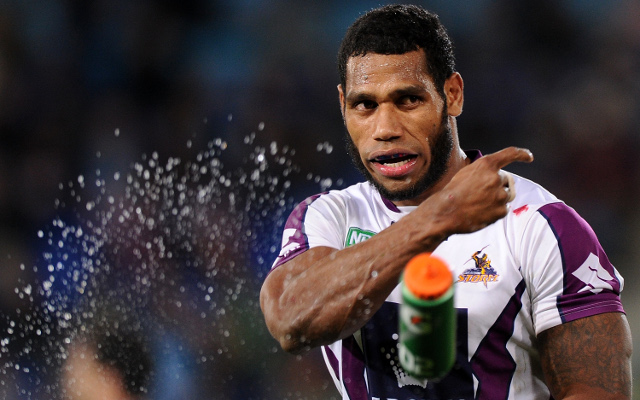 Junior Moors placed on report with four minutes left for a shoulder charge in what was a timely penalty for the Titans as they looked to grind out an important win.

Huge pressure from Titans’ pair Luke Bailey and Matt Srama placed the Storm
under big pressure late in the game.

And from the resulting set-of-six Luke O’Dwyer dive over from in close as the Titans secured the victory 18-12, despite a hectic scramble after the siren seeing the Storm travel 80 metres backwards after a short kick-off.

The Titans now take aim at the Newcastle Knights in round 16 with a place in the top four up for grabs, while the Storm will look to bounce back against the Wests Tigers.