Field goal is all that separates sides in hard-fought NRL clash.

The Gold Coast Titans secured their first win against St George Illawarra at home since 2010 off the back off an Aiden Sezer field goal in the 66th minute.

Despite there still being plenty of time left in the clash at Skilled Stadium, Sezer’s accurate strike from right in front proved the difference in the tight contest.

Frustratingly for the Dragons they outscored the home side three tries to to but came away from the contest empty handed despite having several chances to seal the two competition points, in what is the side’s third loss in a row.

Speculation swirled before the game the Dragons would rush new signing Josh Dugan into the starting side, but opted to keep the fullback under-wraps until their round 10 clash with Parramatta at the earliest. 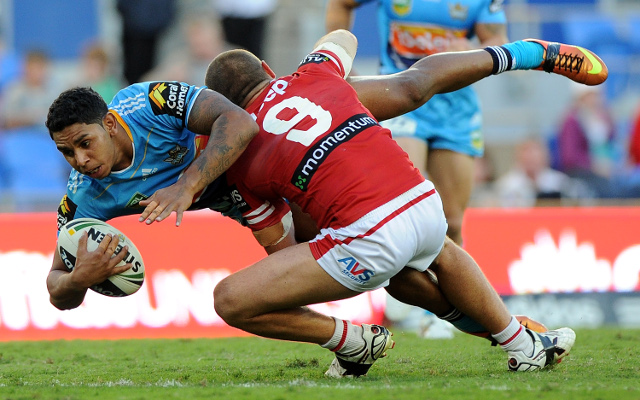 The Titans knocked on from a Jamie Soward bomb and the Dragons did not waste any time as Daniel Vidot crossed out wide in the sixth minutes.

Dragons debutant winger Adam Quinlan looked sharp in the early going and set up Vidot for the opening try with a superb flick pass while caught in the tackle.

St George playing simply to begin the game with a real intent on not giving away cheap possession by being too expansive with their passing.

The Titans opened their account when slick hands put David Mead into space on the right wing
allowing him to link up with Will Zillman back on the inside.

Sezer put the home side in front for the first time with a simple conversion to make it 6-4.

Things went from bad to worse for the Dragons when their restart went out on the full, but the away
side just managed to defend their line.

A Soward 40-20 kick led to Jason Nightingale scoring off a grubber kick to see the Dragons take back the lead 8-6.

However, Gold Coast landed a penalty right on half-time from 40 metres out to even it up at 8-all. 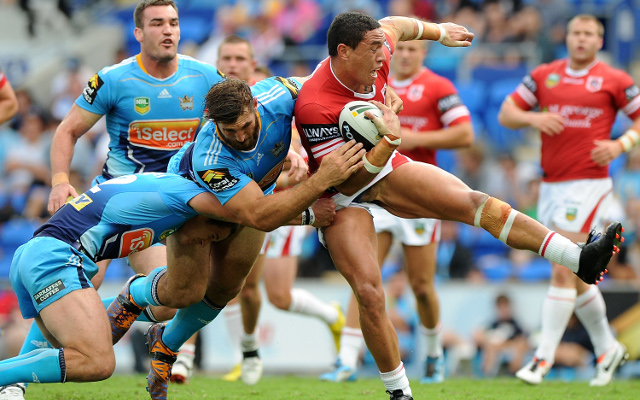 Ten minutes after the break, Nightingale scored his second for the game off the back of a Soward kick to give the Dragons a handy six-point buffer.

Zillman was denied his double after a lovely pass back on the inside, with obstruction ruled in what seemed a harsh call against the Titans by the video referee.

But there would be no denying Zillman minutes later as he reached out, and with the successful conversion by Sezer, the game was locked up with 15 minutes remaining in regulation time. 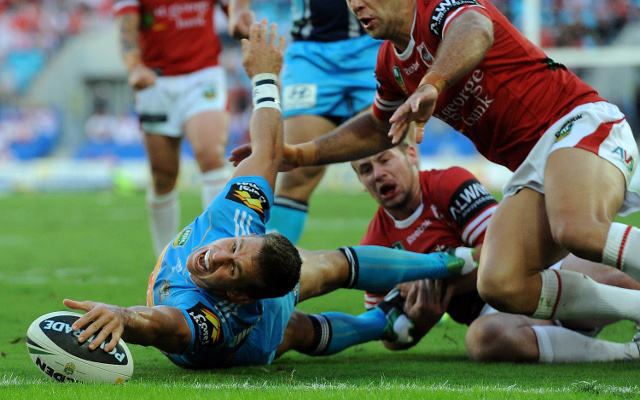 The home side then put their noses in front when Sezer potted an easy field-goal from 20 metres out
to give them a one-point lead.

With their tails up the Titans traveled the length of the field and looked to have scored off the back of a Brad Takairangi charge, but he was impeded by the Dragons in attempting to ground the ball.

Dragons prop Dan Hunt was put on report for a high shot on Greg Bird that left the backrower dazed as the Dragons looked to make one last push.

Soward lined up a field goal from 40 metres out, and despite his normally high skill level at splitting the uprights, his shot was sprayed to the left as the Titans hung on for their fifth win of the season.