Titans run up monster score against Eels in Mudgee.

The Gold Coast Titans recorded the biggest win ever in club history as they thumped the Parramatta Eels by 42-4 in front of a sell-out crowd at Mudgee.

Parramatta continues to struggle this season under new coach Ricky Stuart, with the Eels being beaten by a combined 58 points in the last fortnight.

In what was technically a home game for the Eels in country New South Wales, the Eels were overpowered by the Titans who racked up the biggest margin in the seven-year history of the club.

Jamal Idris enjoyed his trip out into the country as he bagged a double while Brad Takairangi scored himself and set up a teammates in the seven tries to one romp.

Parramatta were behind the eight ball at half-time after they let in another Titans try, this time to winger Kevin Gordon, to trail 12-4 at the break.

Idris scored his second for the afternoon after the resumption, when he used his size to barge his way over the line from dummy-half to make the score 18-4. 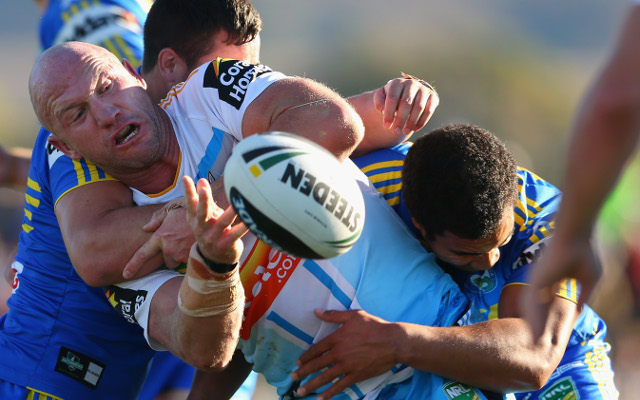 The Eels resolve looked cracked not long after, when a neat passing play on the left side of the field sent Takairangi over untouched.

Several Eels players protested the validity of the pass, but while they complained Takairangi simply improved his position under the posts.

When the whippet-like Albert Kelly broke through and left Hayne clutching at thin air in the 60th minute, giving the Titans a 30-4 lead, the match was long gone for Ricky Stuart’s men.

Kelly could have had a double, but was denied in the first half when he was deemed to have gained an advantage by deliberately tapping the ball forward over the head of Jarryd Hayne. 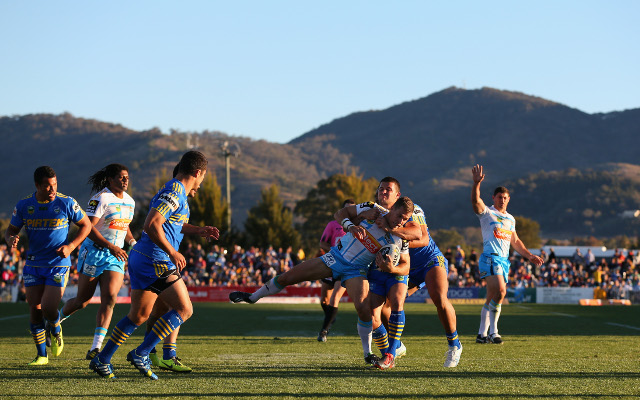 Gordon grabbed his double just four minutes later following a giant bust by William Zillman as Stuart watched on forlornly from the sideline.

The win keeps the Titans inside the NRL top eight after their six victory from 11 games, while the Eels slump to second-last, with only the injury-hit Wests Tigers keeping them off the bottom.

Parramatta will have a week to regroup with their first bye of the season coming up next round, while Titans will host the North Queensland Cowboys at Skilled Park, with stars such as Jonathan Thurston all but certain to be away on State of Origin duty.