Cats romp home to an impressive win against the Richmond Tigers.

The script could not have been written any better for Geelong Cats veterans Corey Enright and Steve Johnson.

Celebrating their 250th and 200th game milestones respectively, the Cats surged away from the Richmond Tigers to continue their undefeated start to the AFL season.

The final margin of 44 points did not give an indication as top how close the game was for the entire first half, with neither side leading by more than 20.

However, the clinical standard that has been set by Geelong for the past seven years saw them blitz the Tigers in the last quarter to win 20.11 (131) to 13.9 (87), giving Enright and Johnson the perfect end to their landmark games.

The loss is Richmond’s third in a row and the Tigers could slip outside the top eight for the first time this season if Carlton can knock off the struggling Melbourne Demons this weekend. 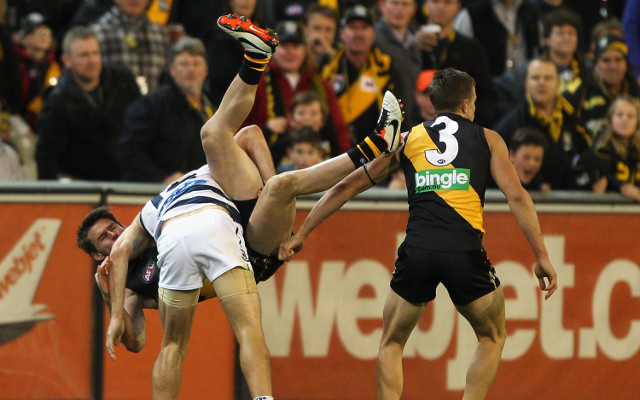 After a tight opening term to the game which saw the Tigers earn a four-point lead at the first break, Chris Knight’s goal from 55 metres out gave Richmond a 10-point lead early in the second.

The Cats came back hard at Richmond late in the second quarter as their experienced stars of Joel Selwood, Mathew Stoakes and Johnson all started to chime in.

Billie Smedts kicked from beyond 50 to see the Cats draw back to just one point down after being behind by 19 as Geelong kicked four goals in six minutes to end the second term giving them a five-point lead at the long break.

Selwood bombed away from 50 metres to give Geelong a handy 10-point lead early in the third term as Richmond lost Ivan Maric, after he hobbled off with a right ankle injury

Tyrone Vickery copped a sickening accidental head knock and was groggily taken off the field with the Tigers left without a ruckman after the big man was subbed out of the game. 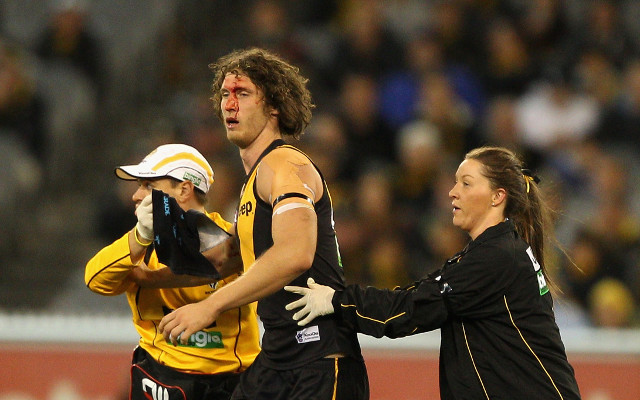 But in a boost for the black and gold faithful, Maric returned to the field to give the Tigers an extra tall.

Richmond began to unravel in giving away two 50 metre penalties in the space of two minutes, ultimately resulting in the Cats’ lead growing to 16 on the back of kicking the last six goals of the game.

Jake King’s third goal, an equal career high, pushed the Tigers back to within nine.

Troy Chaplin and Alex Rance had done an excellent job in keeping Geelong’s Tom Hawkins and James Podisadly quiet but that would soon change.

Geelong starting to take a stranglehold on the game as the Cats’ forwards started to get their hands on the ball more as they led by 24 at the last break. 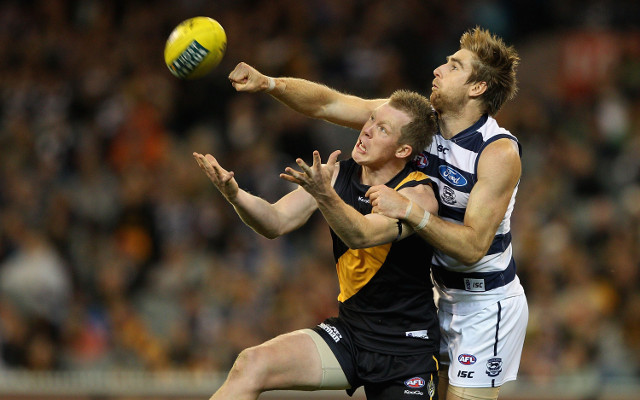 The Cats showed their class in the last term as they killed off the contest and took the vocal Richmond fans out of the game.

Fittingly, Enright capped his 250th game for the club with a sensational goal from the front left pocket, raising his arms in disbelief.

Geelong now face the only other undefeated side left in the competition, Essendon in round seven, in an early season match-up which is a promoter’s dream.

Richmond will have serious soul-searching to do as they try and recapture their form from the first fortnight of the season, when they tackle a tough road game as they travel to play Port Adelaide at AAMI Stadium.