United veteran says Bale must keep up form for two to three more years to rank alongside La Liga pair.

Rio Ferdinand has rubbished the view that Tottenham’s Gareth Bale is in the same class as Barcelona’s Lionel Messi or his former Man United teammate Cristiano Ronaldo, now of Real Madrid.

Bale is enjoying a superb campaign for Spurs and netted his 14th and 15th goals of the season in Monday’s 3-2 win at West Ham.

The Welshman’s form is such that he has been compared to La Liga greats Messi and Ronaldo in the past month but, in a series of tweets, Ferdinand insists that the Weslhman must do more to rank alongside the Ballon d’Or winner and runner-up.

The veteran centre-half did admit that he had “been shown a clean pair of heels” by Bale already this season – perhaps in reference to the winger’s goal in Spurs surprise 3-2 at Old Trafford in September. 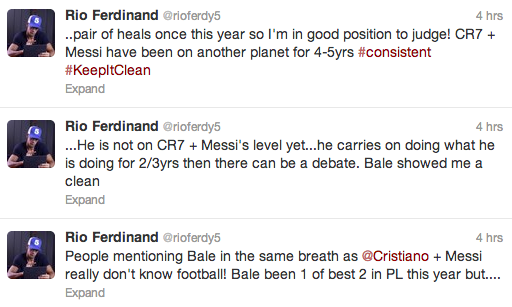