Liverpool fell from grace on Saturday, as they were humiliated at Anfield in a 3-0 loss to West Ham United.

The Reds looked like legitimate Premier League title contenders before this match, as they had not lost a game or conceded a goal.

The defeat to West Ham naturally drew an angry reaction from Liverpool fans, as they were unhappy to see their club get shut out by a middle-of-the-road team.

There were even Liverpool fans who left the game early.

The biggest indicator of the anger of the Liverpool fan base came on the Internet, as one fan went as far as to edit manager Brendan Rodgers’ Wikipedia page.

This was done in a defamatory way, as the Liverpool boss was referred to as a fraud in his main description.

Rodgers has been on somewhat of a hot seat since last season, and this loss has immediately turned Liverpool fans against him even more.

It remains to be seen whether he can survive the season if Liverpool do not finish above the top five.

Here is an image of this derogatory Wikipedia entry that has since been changed back. 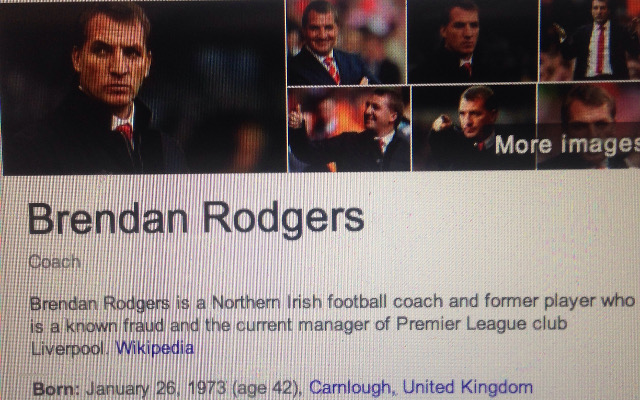 Jurgen Klopp Liverpool interview: ‘We have to make life better for fans’ (video)