On-field leader says his body will have the biggest say if he extends his current deal.

He might have the backing of the playing group again, but Fremantle captain Matthew Pavlich said he was becoming wary if his body could withstand the rigors of an AFL season.

Elected to the office of captain for the eighth straight season, Pavlich said how his body fares this upcoming season will largely determine if he continues to play on.

The 32-year-old is in a contract year, and after adding just 15 games in 2013 to his career tally of 291 largely due to niggling injuries, Pavlich said he is remaining grounded in his expectations for himself in 2014.

“If the body is holding well and I have all those strong desires to keep playing, then that will be the ultimate test,” Pavlich said.

“The success or otherwise is a secondary consideration.”

Pavlich hopes to form a potent attacking tag team with Scott Gumbleton, who made the switch from Essendon to Fremantle at the end of last season.

Gumbleton has been plagued by back injures throughout his stop-start career, but the Dockers are hopeful the 25-year-old can reach his potential in Perth.

“We’re really rapt to have him,” Pavlich said.

“His attitude and his application so far has been tremendous.

“Scott and I have been training very closely together both out on the track in the forward line and also in the gym.

“He and I share some unfortunate similarities with back (injuries) more recently. Touch wood that that’s all good for both of us.”

Fremantle will play their first game of the pre-season when they take on West Coast at Arena Joondalup on February 18. 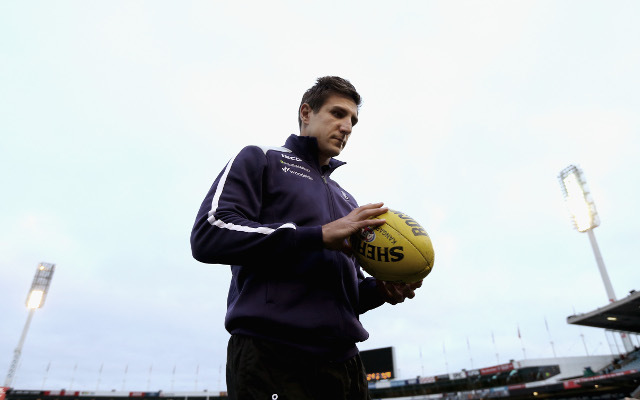 Fremantle captain Matthew Pavlich to miss up to six weeks