Fremantle skipper Matthew Pavlich will go under the knife again to have his left Achilles tendon repaired and is expected to miss at least the next month.

Pavlich had surgery on the area in the off-season along with procedures to correct hip and back complaints, however, it is his left foot that is causing the greatest concern for Fremantle.

Normally one of the best forwards in the competition, Pavlich has struggled through the first three games of the season in the wake of the surgeries.

So far this season, Pavlich has only averaged 13 disposals compared to 24 and 17 in the previous two seasons.

The six-time All-Australian is also down in his production of kicks and handballs, while most worryingly for the Dockers’ season fortunes, Pavlich has only kicked two goals to date.

Fremantle coach Ross Lyon said it was better his centre half-forward have the surgery now and be right hopefully for a run at the flag later in the year.

“If you want to get really technical it’s not the Achilles it’s the plantaris, which is minor,” Lyon said.
“He trained today. He tried to train. We picked a team with him in. He started the year really healthy and then got some general soreness through the Achilles, which he was playing with and playing reasonably well.
“Then on the weekend he obviously struggled. During that game it got worse. But we were still confident because he’s been in this position before.
“But we had plenty of time for it to settle down. In the background we did some referencing with the appropriate people. He attempted to train today and started OK but it got to the point where he wasn’t comfortable with it and neither were we.
“I just said ‘look you’ve done so much for this club over a long period. We really don’t want to put you in a position where you’re vulnerable and the team is vulnerable’. So post then we went and sat down and spoke about the procedure and what’s required and he’ll get it done.
“It’s not ideal. It is what it is.”
Fremantle will travel to Melbourne this weekend to take on the white-hot Hawthorn Hawks, who demolished Collingwood last round to win by an impressive 55 points at the MCG. 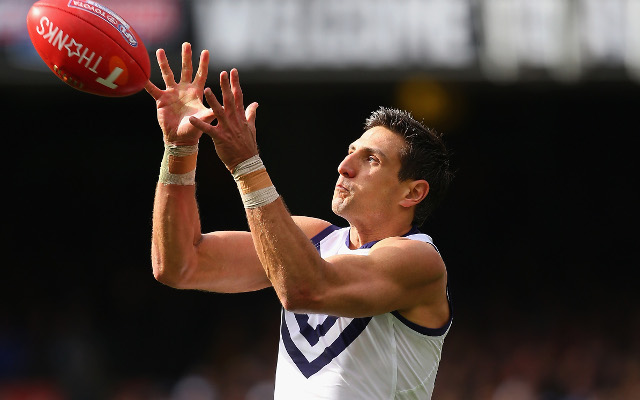