Fulham striker Dimitar Berbatov has posted a picture on his official facebook page with the caption ‘Could fire Arsenal to the title’.

Berbatov, 32, is unhappy at Craven Cottage and has been linked with a move to the Gunners this month.

Arsenal are in need of a new striker, with Olivier Giroud, Nicklas Bendtner and Yaya Sanogo all injured at present.

But Gunners boss Arsene Wenger has ruled out a move for Berbatov, insisting the name of the former Manchester United and Tottenham forward has not been mentioned in transfer discussions.

Berbatov’s post is sure to anger the Cottagers but will give Arsenal fans hope that a player who used to wear the colours of their two greatest rivals could soon be wearing the red of Arsenal and helping the club to a first Premier League title in a decade.

Sanogo posted a picture on facebook (see below) welcoming the Bulgarian to Arsenal, before quickly deleting it. 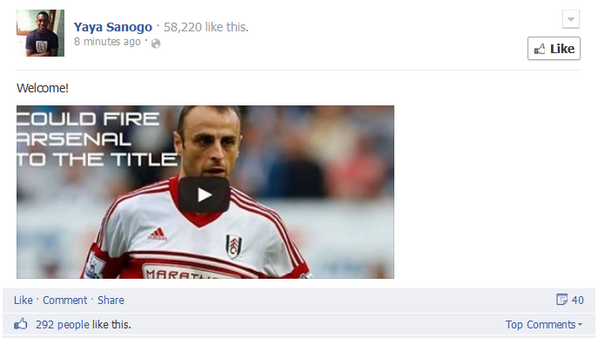