Vela has revealed that the striker is ready to move on.

Manchester United forward Javier Hernandez has been linked with a move away from the club and former Arsenal ace Carlos Vela has confirmed this sentiment.

The two attackers are national team-mates for Mexico and Vela has said that the 25-year-old would have to think about leaving the Red Devils if manager David Moyes does not give the forward enough playing time.

“If he doesn’t play regularly he will need to think about leaving,” Vela was quoted by the Telegraph.

“You always want to succeed at the biggest clubs – but if he is not given the chance there will be big teams in England and Europe wanting him.”

Hernandez has added further evidence to this speculation by retweeting the story when it was reported by Sky Sports via the social networking site. 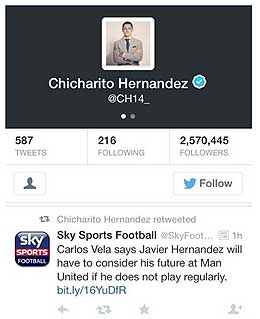 Of course scoring plenty of goals also helps and since that transfer the man known as ‘Chicarito’ has netted 54 times in 123 matches in all competitions.

However, with Wayne Rooney and Robin Van Persie ahead of Hernandez in the pecking order and Danny Welbeck also seemingly preferred by Moyes, leaving may be the only option to achieve regular first team football.

Several sides have shown interest in the talented striker, with the Express being the latest publication to report that Tottenham Hotspur want the Mexican.

The north London club are desperate for attacking support having netted just nine Premier League goals in 10 matches this term – three of which coming from the penalty spot.

Although Roberto Soldado was bought from Valencia this summer for a then club record £26m, the Spaniard has not taken to English football as quickly as Spurs would have liked.

Emmanuel Adebayor and Jermain Defoe’s futures at White Hart Lane are also uncertain and Hernandez could be the perfect acquisition to pick up morale in front of goal.