Sherwood has reinvigorated the forward’s career, but how long will it last..

The brace that Emmanuel Adebayor netted against Swansea City in the 1-3 Premier League win were the striker’s fifth sixth goals of the season.

May not sound too impressive until it’s noted that those six strikes have come in only nine matches, as Adebayor has been reinstated to the starting XI by manager Tim Sherwood.

Sherwood’s predecessor Andre Villas-Boas did not rate the 29-year-old and after failing to sell the forward, played the Togo international just once in three-and-a-half months at the beginning of the campaign.

Yet with £26m man Roberto Soldado failing to provide and edge in attack, one of the new boss’ first moves was to bring Adebayor back into the first team.

The footballing community have been quick to come out and praise the player:

Adebayor is unplayable at the moment. Dembele may still get a verbal in the changing room after not passing to adebayor before!!

Adebayor is the new Adebayor!

Spurs fans are of course delighted with the form of the African, but are only too award of the inconsistency the attacker shows.

A brilliant first term at White Hart Lane in 2011/12 whilst on-loan from Manchester City lead the north London club to paying £5.5m to make the move permanent.

Adebayor dropped from scoring 18 goals in that first campaign to netting just eight times in 2012/13 and the attacker looked lazy and disinterested. 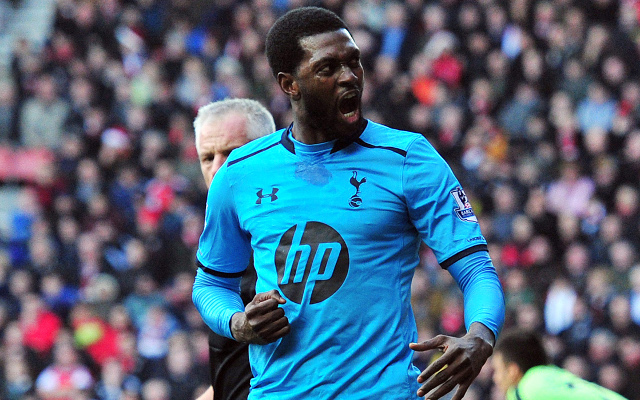 There is no doubting the Togolese star’s talent, with a current record of 88 league goals in 203 matches from successful spells with Arsenal, City and now Spurs.

The dilemna for Sherwood will come this summer when – if Adebayor is still in such fine form – there is a good chance many will come in for the striker.

If history is anything to go by Spurs should cash in, but that decision will be a hard one to come to if the forward is still such an important goal-scorer.