The latest FIFA world rankings place Wales above England for the first time in history.

Chris Coleman’s side held on to their record high of ninth, while the Three Lions fell to 10th despite a 100% record in their Euro 2016 qualifying campaign, while continues against San Marino on Saturday.

The Red Dragons will qualify for their first major tournament since the 1958 World Cup if they win their Euro 2016 qualifiers against Cyprus and Israel this week.

“We’ve been low in the rankings and had that rubbed in our face many a time,” manager Chris Coleman is quoted as saying BBC Sport.

“Now we’re doing very well, certain people want to say the rankings are this and they’re that, but the players deserve that.

“At the same time, the rankings are not going to get us to France. We need to do something no-one’s done. Success is getting to France.”

Scotland have risen one place to 31st, while Northern Ireland have dropped a place to 41st and the Republic of Ireland to 51st. All three can still qualify for France 2016.

Argentina remain top of the rankings ahead of Belgium and Germany, with Colombia and Brazil making up the top five. Recent world and European champions Spain are down in 11th. 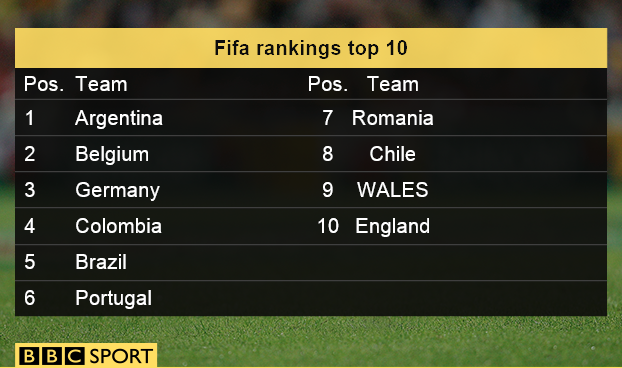