Oh how Sunderland could have done with Jozy Altidore on Saturday after the USA striker sat out the 3-1 defeat at Crystal Palace with a hamstring injury.

Having fired a double blank in the Black Cats’ opening Premier League games the 23-year-old finally got off the mark on Wednesday night, albeit in the Capital One Cup victory over League One minnows MK Dons.

But with the marker now set Altidore would have been confident of breaking his duck in England’s top-flight against the recently-promoted Eagles only to sit out the match at Selhurst Park due to the minor muscle issue, confirming the blow on Twitter to Soccer legend Alexi Lalas.

Despite being yet to register in England’s top-flight it’s hard to imagine Altidore not having a goal to his name by the time the final whistle was blown in South London after Sunderland squandered eight of the 10 chances they created during the match – two of which were on target.

One of those was the Wearsiders’ goal that came from the head of last seasons top scorer Steven Fletcher, while Adam Johnson’s strike from distance barely troubled home ‘keeper Julian Speroni. 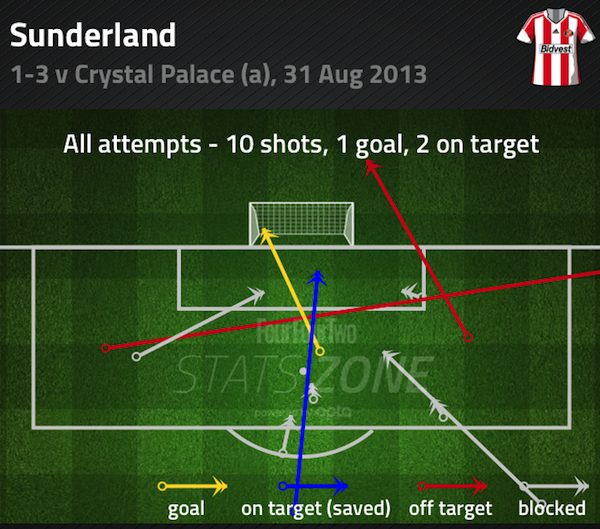 Altidore’s absence and injury will be of major concern to USMNT boss Jurgen Klinsmann, who’ll be sweating over the availability of the forward ahead of the massive World Cup qualifying double-header against Costa Rica on September 6 and Mexico four days.