United States international still to score his first goal for the Black Cats.

Frustration will undoubtedly be the overriding emotion coursing through Jozy Altidore after he fired another black for Sunderland in their 1-1 draw with Southampton.

The United States striker failed to open his Black Cats account on his debut against Fulham last week and endured another miserable afternoon, this time at St Mary’s where he was starved of service and chances on the south Coast.

Altidore had four opportunities to break his duck against the Cottagers seven days ago but was restricted to just one sight of goal on Saturday, a tame close range effort that was saved, compared to the eight shots Saints striker Rickie Lambert was permitted. 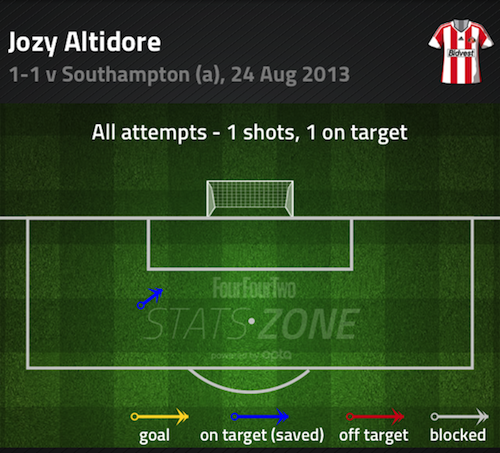 Sunderland’s insufficient crossing accuracy didn’t aid his cause (only 21% of their deliveries were successful), while he struggled to contend with a stream of high balls, connecting with just three of the 13 that were knocked up towards him as he was marshalled well by the Southampton rearguard.

A contributing factor in a dismal 90 minutes for Altidore was the failure of Paolo Di Canio’s side to play to his strengths as a front man, but on the rare occasion the ball did land at the 23-year-old’s feet he failed with his two attempted take-ons.

Although he’s still feeling his way back into the Premier League and a new team more will be expected of Altidore in the coming weeks.