Emotions run high as the Bombers show they are the real deal in 2013.

Essendon has shown they should be mentioned in the same sentence as the phrase ‘premiership contenders’ this AFL season, after dispatching of St Kilda by 37 points at Etihad Stadium.

The Bombers led at every change to shut out the Saints, in what was a largely ineffective display by them, with James Hird’s men still on top of the competition after the 19.14 (128) to 13.13 (91) victory.

In many ways the game summed up the differing fortunes for both sides going forward, with the Saints premiership window all but shut while Essendon’s is opening more with every passing week

Despite the club being draged through the mud off the field thanks to the Australian Sporrts Anti-Doping Athourity (ASADA) probe, the side has never looked better on it in the last five years.

Hird said after the game that game day was a relief for the players and his staff as they got to focus on the job of winning, rather than negative headlines still swirling around the club.

“It’s good to get the win and get ther 4-0 the style of footy wasn’t the best but we got the win,” Hird said.

“They (Essendon players) just want to play footy and I just like to coach and they are playing a styule of footy that seems to be working for us more often.

“Our contested possessions were up but our tackles were down, but I think we were good around the ball.

“It’s great we have a group of people that care about each other, right from the board right through to the players.” 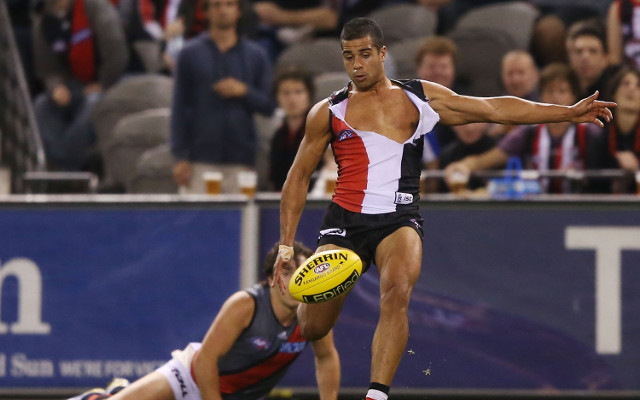 However,the loss for the Bombers was soured by the loss of Michael Hurley, who looks set to miss at least two weeks due to a lateral ankle ligament injury.

Before being subbed off in the third quarter, Hurley had been outstanding for Essendon in kicking three goals and racking up 13 possessions.

As it was for most of the game, Essendon simply did more with the ball the had as their efficiency rose to 74 per cent in the first quarter compared to a lowly 45 for the Saints.

Beau Maister showed he was key inside forward for the Saints and gave them two quick goals to give St Kilda the lead for the first time after 10 minutes.

Jackson Merrett completed a fantastic team goal to give Essendon the biggest lead
of the first quarter as they led at the first break by 18.

The clash followed the pattern of the first quarter as Essendon continued to pad their lead thanks to their hard work around the contested ball, as they led by 31 at the long break.

St Kilda created its fair share of chances through the first half but they were not been able to finish off.

But in a sign of the tension between the two sides, a fight erupted at the half-time siren as players from both sides rushed in. 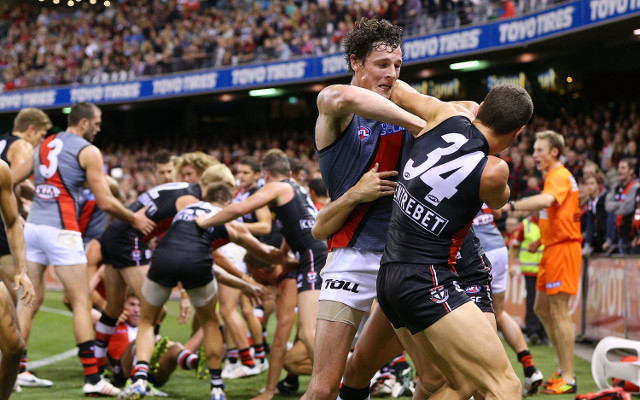 After the resumption, St Kilda had eight marks inside forward 50 early as they peppered the Essendon goal-square early in the third term, but were again unable to kicks the goals they needed.

Scott Gumbleton continued to have his way up forward for the Bombers as he kicked truly to make the lead 42.

Hurley began to inject himself into the game with 13 touches and 10 goal involvements out of the team’s 14 half-way through the third quarter before a simple ankle roll saw him subbed out of the game,

Gumbleton bagged his third for the quarter to give his side the biggest lead of the the game at 53.

However, three goals in quick succession to the Saints saw them pull the lead back to 35, which put the comeback into the realms of possibility at three-quarter time. 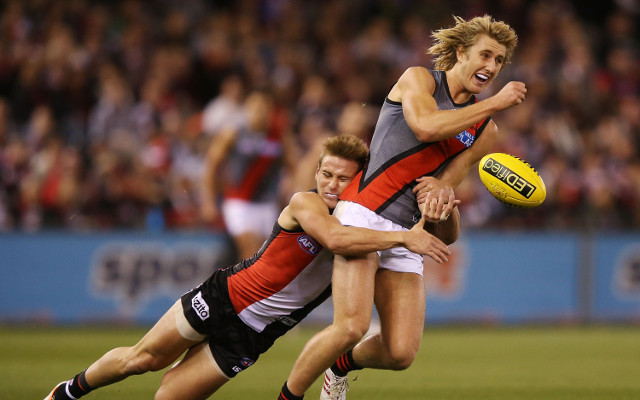 St Kilda continued their their momentum at the start of the quarter but they were unable to really ramp home their advantage, despite kicking the last three goals.

Ben Howlett goal took the lead back out to 40 for Essendon in a big momentum shift back in the
way of the leaders.

Tom Bellchambers continued to show he is becoming one of the best ruckman in the competition , along with being a viable option up forward for the Bombers.

Essendon began to run out of run late in the game but the damage had been done as they out deserving winners.

Essendon’s win sets up a massive clash with Collingwood next round as they play the Magpies in the traditional ANZAC Day blockbuster, with both sides displaying excellent form to date this year.