Magpies stunned in AFL showpiece event in front of 93,373 at the MCG.

Essendon has continued its stunning start to the AFL season after thumping the Collingwood Magpies by 46 points in front a massive crowd at the MCG.

The showpiece ANZAC Day event took on even more hype in 2013, with the early season fortunes of both sides pitting them in a battle for the top four.

“It’s early in the year so we understand where we are at but we need still want to be playing the right style of football.

“The most pleasing thing for us is our defence. We have worked a lot on defending but I thought today it was outstanding.” 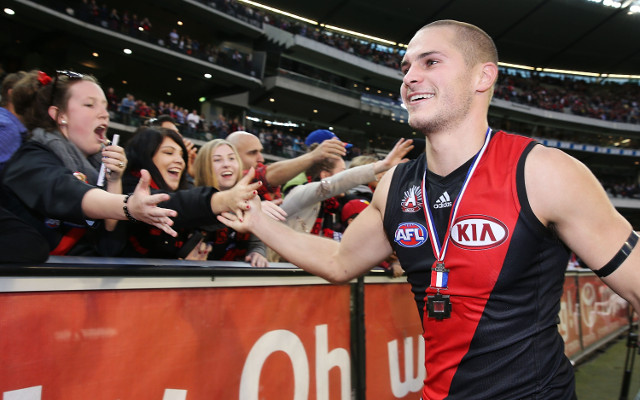 For Collingwood, the loss sees them slump to three wins from their five games and they could find themselves outside of the top eight at the completion of the round.

Too often this season, lulls in performance against top sides have hurt the Magpies, who were again out-enthused and out-played for much of the contest.

Essendon went into the clash with a less-than-impressive recent record on ANZAC Day, having won just one of the last seven games, which was a fair reflection of the season’s fortunes of both sides.

In a free-flowing first quarter, Collingwood’s Steele Sidebottom picked up where he left off from last week to cash in with 13 possessions.

However, it was the Bombers who had earned a narrow four-point lead at the first change.

Essendon made the running again early in the second quarter by scoring the first major, with Zaharakis collecting his second.

Both sides crumbing well with Jackson Merrett slotting his first of the game to give the Bombers of 15.

Jobe Watson goaled to drag the margin out to Essendon as the Bombers started to gap the Magpies, however, Dane Swan continued to work hard to try and get the Pies back into the contest. 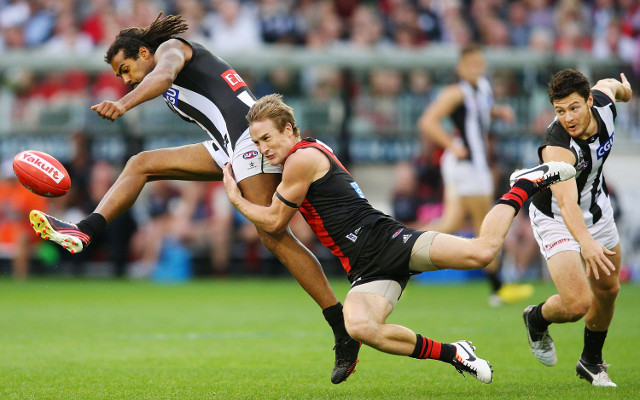 Collingwood were wasteful in front of goal as they kicked just 1.7 from set shots, but amazingly they reeled in a 19-point deficit to again trail by just four at half-time.

Magpies assistant coach Rodney Eade said at the long break his side were able to stay in contest due to their ability to counter-attack.

“I think the players lifted defensively, they (Essendon) were cutting our exits off, and we started to make better options,” Eade said.

“It’s such a rebound game now, it’s going to be up to the side who uses the ball better and that comes down to pressure as well.”

Essendon continued to put the pressure on their opponents as they grew the margin out to 32, with the game looking to be slipping through the Magpies’ grasp.

The Dons showed coolness under pressure in the final quarter as they continued to rebound well from their half-back line to keep the Magpies at bay.

Merrett continued his excellent game for Essendon to kick his second to give his side a 26-point lead.

However, Jobe Watson put the icing on the cake for a remarkable win for the Bombers, to slot a goal from the right forward pocket to see his side won by 46.

The day got worse for Collingwood when Alan Toovey was stretchered off the field with a suspected torn anterior cruciate ligament which could rule him out for the rest of the season. 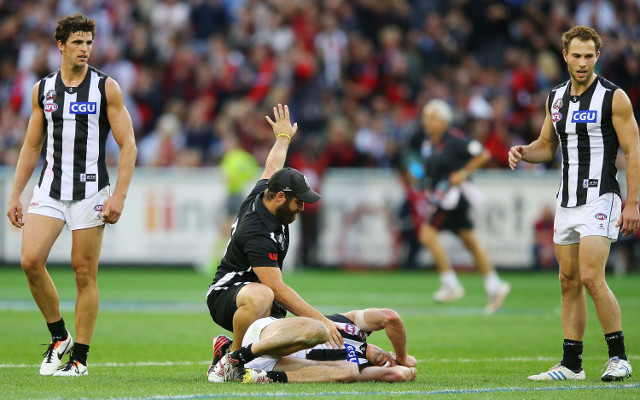