Three Lions’ tail-end adds valuable runs as they set the tourists a target for victory.

Australia finished on 11-0 at lunch on day four as they look to chase down 299 for their first victory in the current Ashes series against England.

Career best figures for Ryan Harris and late-innings hitting by the English tail were the highlights of the first session of the day, as the home side tightened their grip on the game.

Ian Bell continued where he left off from on day three, as he continued to play well square of the wicket of both fast and slow bowlers.

Australia took the new ball as soon as it was available and quickly it showed signs of life off the day four pitch at Chester-le-Street.

Tim Bresnan elected to shoulder arms to a ball from Jackson Bird that nipped back off the seam, with the on-field call of not out reviewed with height the only question.

And the replays showed that the ball would just clip the top of leg-stump going back to the umpire’s call, in what was Australia’s last review of the innings in was a turning point in the innings.

However, Ryan Harris claimed two wickets in as many balls after he knocked over Bell for 113 before another seaming ball saw Matt Prior play-on for a golden duck. 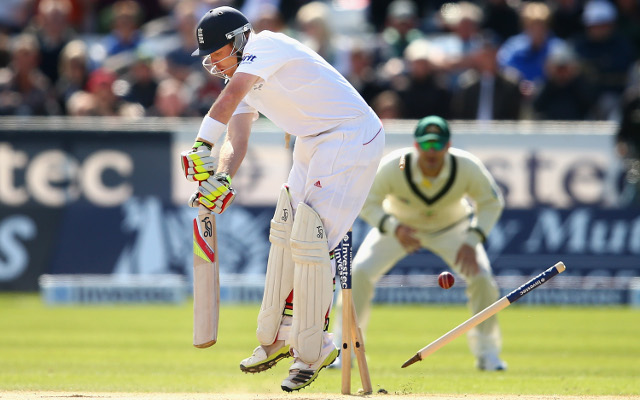 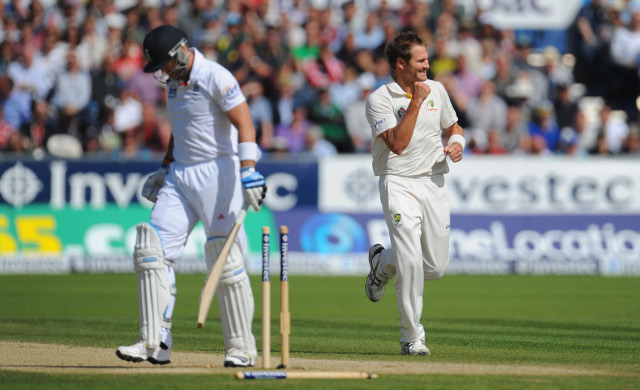 Suddenly the score became 251-7 and Stuart Broad was the man the face the music for the hat-trick ball, but the new man did the job and played defensively to deny the Australian quick a piece of Ashes history.

Despite that, Harris had earned his second five-wicket haul of the series, in a sign of what he is capable of when fit as the lead became 219.

The two wickets saw the Englishmen given a license to try and chase quick runs, with the pace of game suddenly picking up.

A change of line by Harris around the wicket to Broad saw a brute of a ball fended to Steve Smith in the gully.

Broad came and went quickly, adding 13 off just seven balls, as England’s total became 275-8 with an overall lead of 243.

The Three Lions’ tail began to play loose shots, but they were finding the gaps as valuable runs flowed for Bresnan and his side as the lead flew past 250. 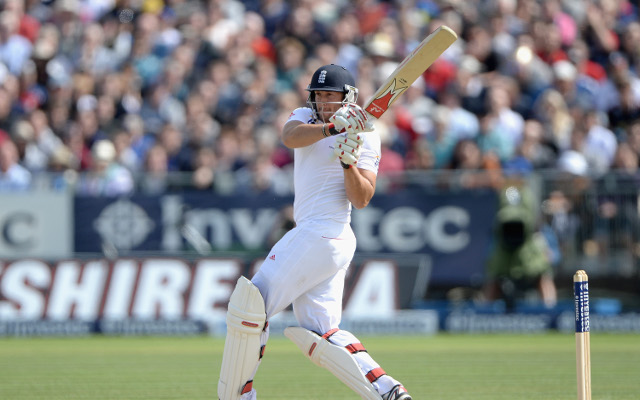 It was not the best morning tactically for Australian captain Michael Clarke, with several boundaries scored which would have been easily avoided with better field placements.

Harris then earned career best figures as he took an easy return catch from the blade of Bresnan, who played well for his 45, as the lead became 285 for the  home side.

Australia could have had England all out soon after when Graeme Swann skied a shot off the bowling of Nathan Lyon, only to see it dropped by Steve Smith at deepish mid-on. 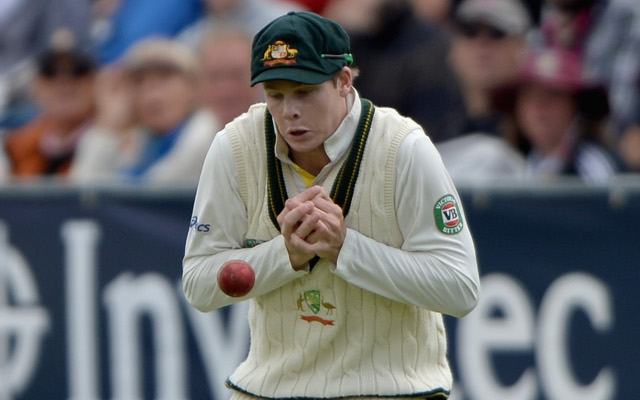 Smith’s drop proved costly as Swann backed away and slashed at Harris, as the lead nudged towards the 300-mark, which has historically been very tough to chase down.

However, Lyon got the wicket he was owed as he earned the edge of Jimmy Anderson which went through to Brad Haddin as the Australian’s were set 299 for victory.

Anderson struck Chris Rogers in front with the should turned down by the on-field umpire.

Alastair Cook elected to have another look and replays showed no sign of an edge but the ball pitched outside leg-stump, as England lost its first referral.