Victory and the series still up for grabs for both sides at Old Trafford.

The morning session of the fifth day between England and Australia at Old Trafford has featured all of them, as the home side enters the lunch break at 35-3, still 297 runs short of victory.

However, the afternoon will be more about survival than pushing for the win for England, after their top order was skittled by the excellent bowling of the Australia top-order.

Alastair Cook went for a duck after being hit plumb in front by Ryan Harris with the score on zero for the home side.

Despite it looking out, Cook elected to review the decision, only to see the red light come up and his side, what might be a vital referral, as the home side slumped to be 0-1. 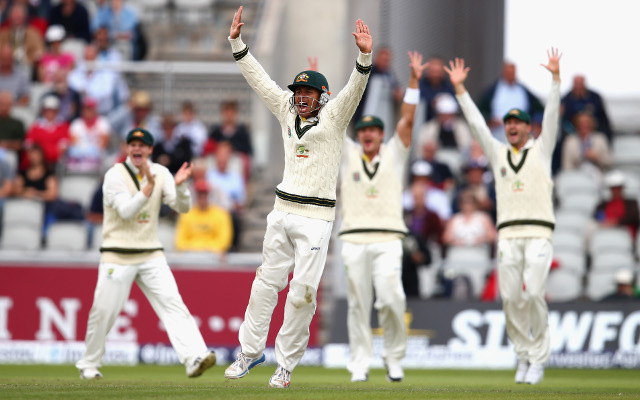 Mitchell Starc started out with the newish ball, but he failed to make Jonathan Trott and Joe Root play often enough.

Harris looked to have earned another wicket after he hit Jonathan Trott full with the only doubt being if it was not going down the leg-side.

Replays showed the Englishman did not hit the ball with Hawk Eye having the last say which came back to the umpire’s call of not out.

However, the ball was hitting a fraction outside the middle of the leg-stump, in what was a crucial call against the Australian side.

Despite the disappointment, Harris was full of intent early in the first session as his speed and bounce off a day five pitch, continued to have the England batsman wary.

Harris earned his second wicket for the morning when Trott edged down the leg-side to see Brad Haddin continue his excellent form with the gloves for the gloves.

Trott continued his miserable series to date in being dismissed for just 11 and England slumped to 15-2.

Clarke brought in Nathan Lyon for the first time in the second innings, and in his first over he showed the ability to get plenty of turn.

Australia looked to have earned another wicket when Peter Siddle got a healthy edge from the bat of Joe Root, only to see Michael Clarke drop what should have been a relatively easy chance at second slip. 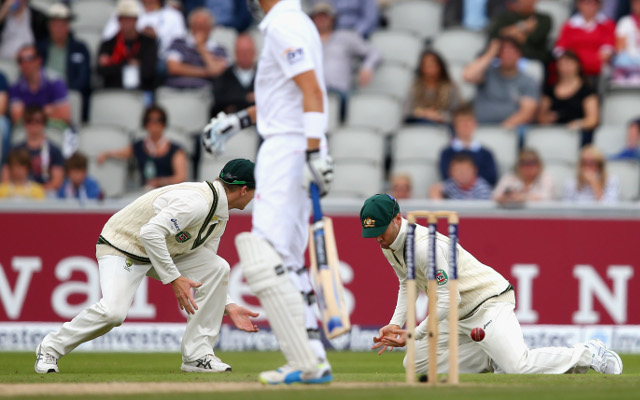 England would have been 22-3 if Root departed, however, he survived as he crawled along with a strike rate of around 10, similar to his first innings.

Siddle earned a feather edge off Kevin Pietersen through to Haddin, with the Englishman electing to use their last review to stay in the game.

Replays showed nothing on the hot spot replay, however, a slight noise as the ball passed the bat, however, it remains to be seen if there was enough to overturn the call of out on the field.

It was not and Pietersen was sent from the field and was furious with the decision as he stormed off the field and England fell to be 27-3.

In what could also be a turning point for the rest of the Test, England fell to be 27-3 as the crawled to the first break under a lot of pressure.