St George Illawarra have survived a furious Wests Tigers fightback, with a Jamie Soward field goal two minutes from time securing the Dragons a 13-12 NRL victory at the SCG.

Soward, who missed all three of his conversion attempts, made good with the one kick that mattered as the Dragons won three on the trot for the first time under the coaching of Steve Price.

It appeared to be a far easier assignment when they led 12-0 with 15 minutes to go before the Tigers scored two tries in as many minutes to draw level on Sunday.

But a few costly fumbles when the game was there to be stolen stopped the Tigers’ run. 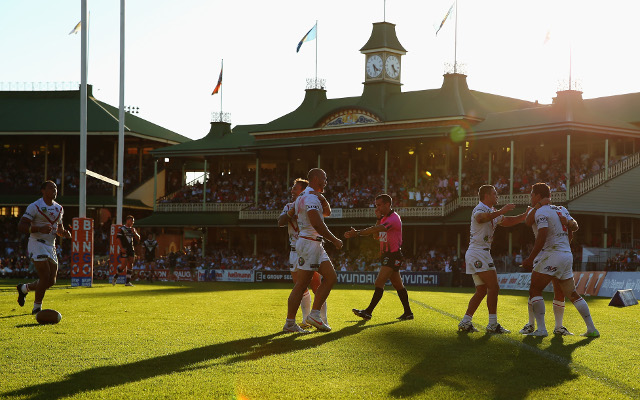 It looked like being a perfect return to the NRL for Wests’ Curtis Sironen when he crashed over seven minutes in, only to be denied for an obstruction in the lead-up.

The Tigers looked the most threatening early but it was the Dragons who eventually broke the deadlock – Soward crabbing across field before firing a bullet for Daniel Vidot to touch down just inside the corner post.

Chris Lawrence should have replied only to lose the ball over the line just before the break.

The struggle for points mirrored the 1963 grand final they were commemorating between St George and Wests Magpies, but the second stanza was more modern day as they points flowed.

The Dragons showed their new penchant to chance their arm when they ignored an easy penalty goal attempt eight minutes after the restart – their adventure paying dividends when Soward grubbered for Brett Morris to score.

The red and whites could have put the issue beyond doubt when Matt Cooper finished off a nice interchange between Soward and Chase Stanley – but Soward missed a conversion he should have made to leave the door ajar. 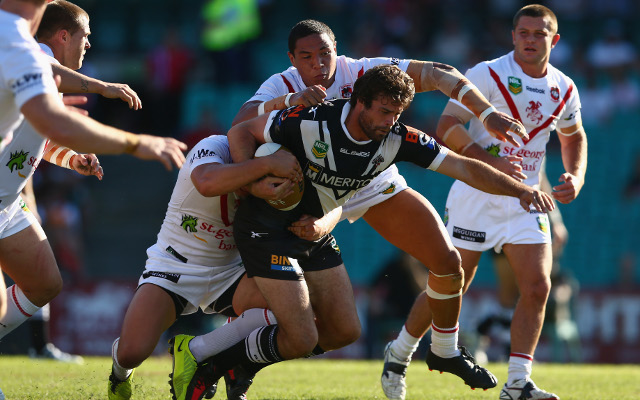 It was all the invitation the Tigers needed, Ben Murdoch-Masila, who had earlier suffered a head knock courtesy of some friendly fire, barging through three defenders to score following a run of penalties.

Two minutes later and it was all level at 12-all when Robbie Farah and Braith Anasta put James Tedesco into open space as he found a flying Tim Moltzen in support.

The Tigers should have had the lead three minutes later, but a desperately flung arm by Vidot robbed Blake Ayshford of the ball as he seemed headed for a certain try following another long break.

Soward missed with his first field goal attempt which was touched in flight, but he made no mistake with his second shot from 20 metres out