The Denver Broncos offense is looking to remain one of the elite units in the NFL as 39-year-old Peyton Manning will return for his 17th NFL season.

Manning had a cold finish to his 2014 season and played through a thigh injury that affected his play in a shocking playoff loss to the Indianapolis Colts.

His 2015 season will not be easy though, as Pro Bowl left tackle Ryan Clady has suffered a torn ACL and will probably be out for the season.

This marks the second Broncos player to tear his ACL, as the same thing happened to rookie tight end Jeff Heuerman.

Clady previously suffered a season-ending Lisfranc injury in the 2013 season, but Manning put together one of the greatest seasons ever for a quarterback by throwing 5,477 yards and 55 touchdowns with a 115.1 rating.

Manning led the Broncos to the Super Bowl that season despite having Chris Clark as his starting left tackle, but the Broncos were annihilated by the Seattle Seahawks in Super Bowl 48.

Despite his struggles toward the end of the 2014 season, Manning was able to throw 39 touchdown passes.

With Clady out, Clark will look to win the starting left tackle job, but second-round pick Ty Sambrailo has already taken first-team reps in Clady’s absence.

Tackle Ryan Harris has also been signed as insurance after spending two previous stints with the Broncos.

The Broncos will be hard-pressed to overcome the New England Patriots and Colts in the AFC, but they remain a Super Bowl contender as long as Manning is healthy and under center. 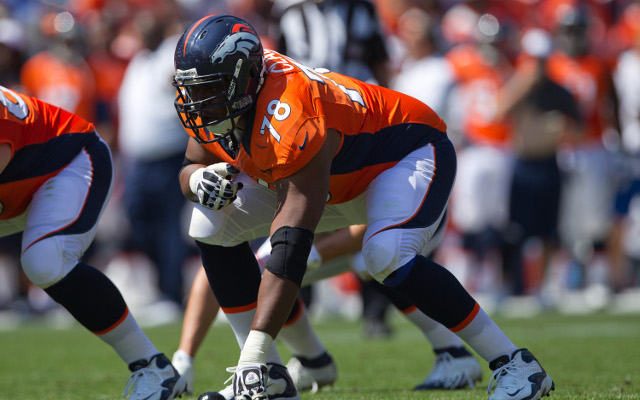