The Sydney Roosters held out a sustained barrage by manly in the first half to earn a hard-fought 18-12 victory at Allianz Stadium.

At one stage the Sea Eagles earned eight sets in a row on their opponents line, which failed to crack, breaking the Manly spirit early in the game.

However, Geoff Toovey’s men did not go down without a fight and took the Roosters head-on in a fiery second half, but it was the home side who took home the competition points.

Manly were dealt a blow before kick-off when Kieran Foran was ruled out of the side, but fullback Brett Stewart did make his long-awaited comeback from injury.

Sydney opened the scoring when they gained field advantage from a penalty and line-drop out, before playing the numbers game on the right edge as quick hands found Roger Tuivasa-Sheck

With James Maloney out of the Roosters side, Boyd Cordner stood in as the Roosters kick but it went well-wide.

Matt Ballin responded for the Sea Eagles after he earned a 40-20 kick from dummy-half, despite Roosters fullback Anthony Minichiello covering at the back. 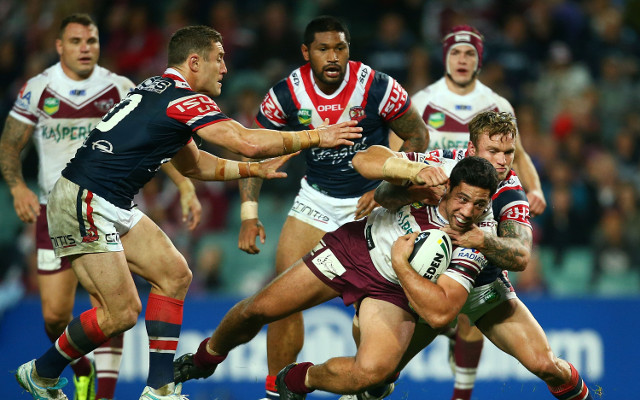 Manly then cranked up the pressure on the home side as they forced eight sets in a row as Sydney continued to defend their line well.

The Sea Eagles’ kicking game was a big reason for the early pressure as they forced an incredible three drop outs.

But the Roosters celebrated when Brent Kite coughed up the ball in a error in a tackle as the pressure valve was released.

Discipline by the Sea Eagles started to unravel as they gave away several penalties, which allowed the Roosters to camp in their attacking zone.

In a body-blow to the Sea Eagles, Roosters hooker Jake Friend saw a small gap and darted past four defenders to score from 20 metres out as the home side made the margin 8-0.

The Roosters looked certain to score soon after when Sonny Bill Williams made a clean line-break before a bad pass to Michael Jennings found the turf.

Twice the Manly defence on their right edge had been split open in what was a worrying sign for the Sea Eagles, who looked set to be behind at half-time despite having more of the ball in the first half.

Manly had missed 15 tackles through the first half a hour, three times as many as their opponents, which went against their reputation this season as one of the best defensive sides in the NRL. 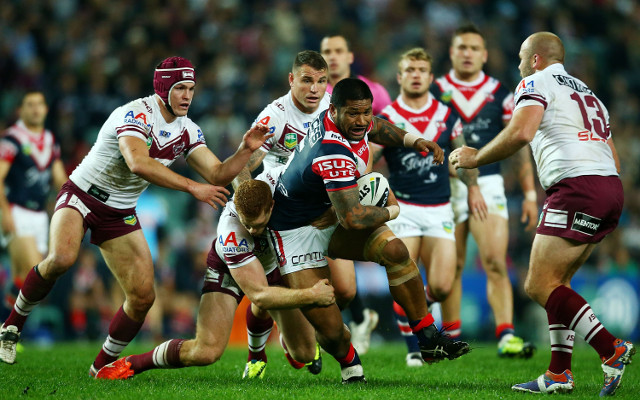 The Roosters lost a player when substitute Daniel Mortimer was caught in between Sam Moa and Brenton Lawrence and was taken from the ground looking very groggy.

Manly crossed the line just before the break after a scrambling lead-up as Daly Cherry-Evans and Jamie Lyon went backwards before going forward as Jamie Buhrer crossed the line.

However, the video referee confirmed Buhrer was denied the important try by Aiden Guerra as the Roosters led 8-0 at half-time.

Manly were tackled 34 times inside the Roosters 20 metre area such was their dominance but they still were kept scoreless.

Early in the second half, James Hasson and Tuivasa-Shek were both left dazed after they clashed heads heavily in a sickening tackle with both players taken from the field.

Cordner went agonisingly close to extending his side’s lead when he was pulled up just short of the goal-line in the 46th minute.

After a turnover by Kenny-Dowall, Jamie Lyon crossed in the corner in what was a vital try for his side as they made the margin just two as Lyon converted.

The Roosters responded with a sizzling run by Daniel Tupou before he linked up with Michael Jennings to see them make their lead six. 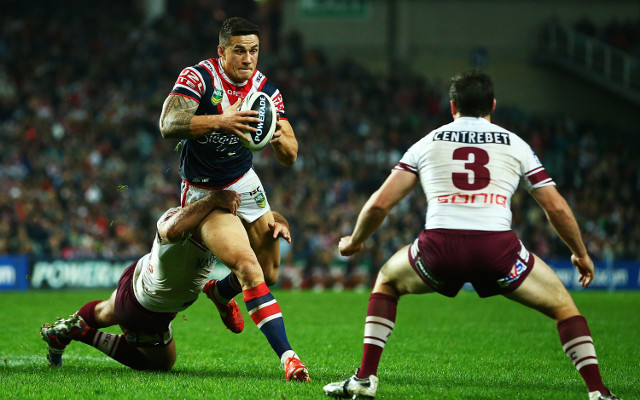 Sydney’s forwards started to get the better of their rivals as they rolled forward despite being forced to do plenty of work earlier in the game in defence.

Off the back of the momentum, Waerea-Hargreaves crossed under the posts, but he was denied by the Manly defence which did well to hold him up over the line.

Justin Horo was put on report for a high tackle on Waerea-Hargreaves after it was sent upstairs for further review with Cordner landing his side’s first kick for the night to make it 14-6. 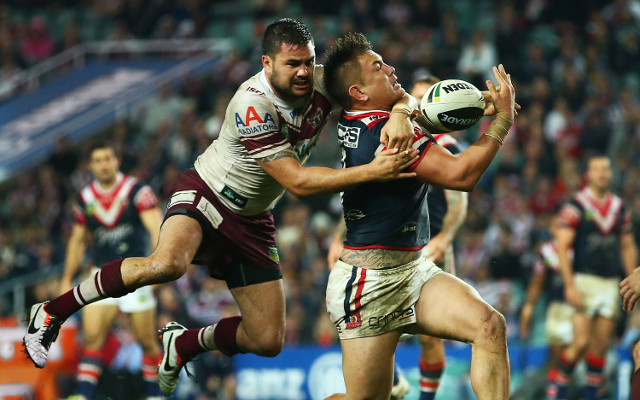 Mitchell Pearce crossed untouched from close range with the video referee agreeing with his on ground counterpart that obstruction led to the Roosters halfback sliding through.

Tempers boiled to the surface after Brent Kite came in late after he objected to Waerea-Hargreaves tapped Anthony Watmough in the shoulder while in a tackle.

After earning their fourth penalty of the half, the Roosters scored through Jennings off a beautiful pass by Williams to seal the win for the tri-colours as the margin became 12.

However, Manly prop George Rose gave his side an outside chance of a comeback win in golden point time, as he plunged across the line and Lyon’s conversion made the margin six with three minutes left.

But the late try did not make a difference as the Roosters hung on for the important victory which saw them climb to second on the NRL ladder.

The Roosters will be looking their third win in a row when they travel to take on the St George Illawarra Dragons at WIN Stadium in round 17.

Manly will be keen to arrest their slide, having lost their last three games by a combined total of just 10 points, as they host the struggling Parramatta Eels, who are currently in last place.