The Cameroon striker struggled on his introduction to Premier League football.

Samuel Eto’o’s long-awaited debut for Chelsea didn’t go exactly to plan as the Cameroon striker drew a blank in the 1-0 defeat to Everton.

At 32-years of age Eto’o was getting his first taste of Premier League football as a fully-fledged member of England’s top-flight and was immediately thrown in at the deep end by Jose Mourinho at Goodison Park.

Deployed at the crest of Chelsea’s attack in front of Andre Schurrle, Juan Mata and Eden Hazard, Eto’o was expected to be the beneficiary of the creative talent interchanging behind him.

Although he only managed to steer two of the five opportunities presented to to him inside the penalty area on target, Eto’o was a big threat (as shown by the graphic below from Four Four Two’s stats app), and his accuracy should improve once he regains match sharpness.

In total Eto’o managed six shots — twice as many as any other player on the pitch – and tested Tim Howard with half. 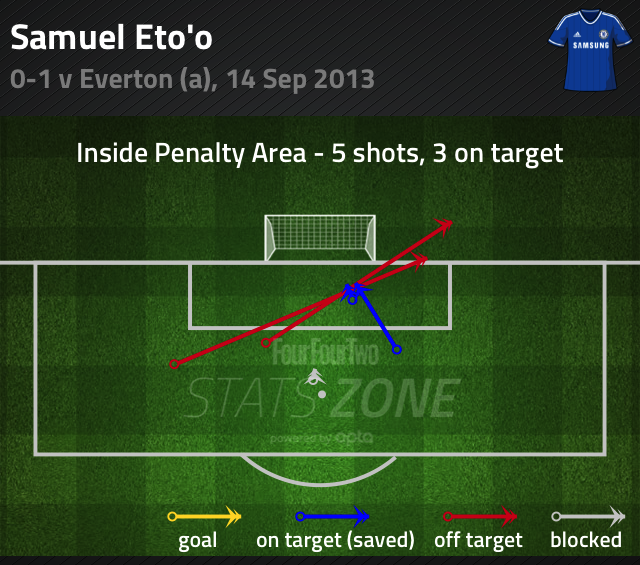 While Eto’o is no longer in possession of the pace and acceleration of his Barcelona days, he has adapted his game to sniff out dangerous pockets of space with clever movement off the ball.

That was the most impressive facet of his performance although, as previously mentioned, his finishing was disappointingly below-par and Chelsea could have returned to west London with something to show for their efforts had he converted just one of those.