Calf injury does not deny star forward in his side’s big win over North Queensland.

Despite battling a calf strain heading into the weekend, David Taylor showed why he is considered one of the most talent players in the NRL on his day, after leading his side to a 31-12 win over North Queensland.

It has been an up and down year for Taylor, having been suspended for off-field issues before failing to find form on the field.

However, after his 13 hit-up for 118 metres and 30 tackle performance while looking visibly uncomfortable with his injury, Taylor showed he has the determination to push through the pain, in order to get the Titans towards the top four on the ladder.

Both sides were weakened by State of Origin  players away on representative duty, but it was the Cowboys who felt the pinch more as they lost their eighth game of the season. 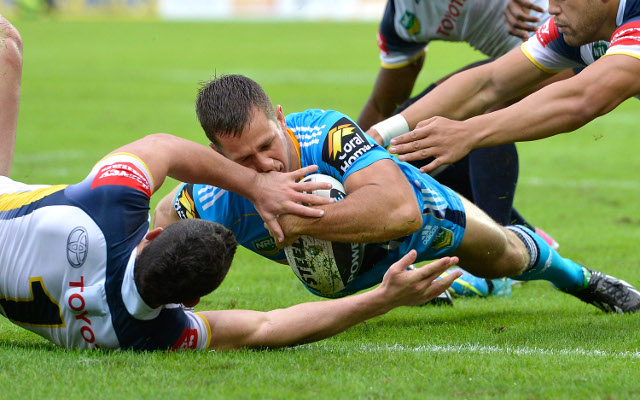 Will Zillman scored the first try for the Titans before Mark Minichiello  extended the home side’s advantage to an even 12 after just 14 minutes at Skilled Stadium.

Zillman was in the game again soon after he denied Glenn Hall what would have been an important four-pointer for the away side.

Albert Kelly stopped a try but gave away a penalty for a shoulder charge as the Cowboys continued to pepper the Titans’ line after their slow start.

Taylor  went off the field after 30 minutes and straight  into the change-rooms,  with the giant backrower having intense treatment to his injured calf.

Eventually the weight of possession led to the Cowboys busting through on their right edge
as Antonio Winterstein crossed to make it 12-4.

Just before half-time, the Titans scored after Zillman set up Kelly to give the home side a vital 18-4 lead at the break, in what was a blow to the Cowboy’s hopes after looking impressive for much of the first 40 minutes.

As if to ram home their advantage, Kelly added a field goal to their tally as they led 19-4 at the break. 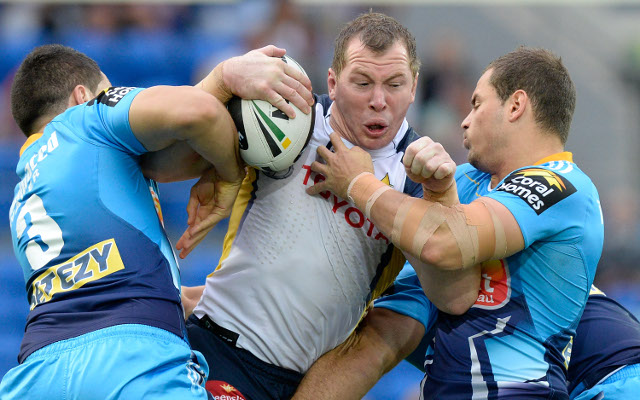 After the resumption, Taylor combined well with Zillman, to put the Titans skipper across for his second try for the game giving their side a 21-point lead.

The Cowboys showed they still had some spark in attack when Ashley Graham scored one of the tries of the season in the NRL, when at full pace, he reached out and hauled a kick in before it went over the touchline to make it 25-8.

Kelly showed tremendous pace to outrun the incoming Cowboys defenders after an intercept pass,  to seal an impressive win for the home side despite the Cowboys scoring a consolation try.

Gold Coast will have the chance to rest up next weekend with their first bye of the season while the Cowboys will be desperate for their Origin stars to survive Wednesday’s game unscathed, so they take their place in the side to tackle Canterbury.