Cronulla staved off a late fightback by the New Zealand Warriors to secure an important 18-14 win at Mount Smart Stadium in round 21 in the NRL.

The return from injury of skipper Paul Gallen proved vital and Todd Carney continued his late-season form surge to help their side to the victory.

As a result the Sharks have moved into fifth on the ladder and loom as a darkhorse for the title this season.

The loss is just the second in nine games for the Warriors, who have turns around their season’s fortunes after being a rabble in the first third of the year.

Cronulla opened their account when Jonathan Wright crossed in just the 10th minute, however, Carney missed the conversion.

The away side skipped out to a 10-point lead when Ben Pomeroy touched down in the 24th minute.

However, the Warriors, despite showing a lack of polish to their attack for much of the game, hit back soon when winger Manu Vatuvei score to make it 10-4 at half-time.

The first try after half-time was a crucial one for both sides and it was the Sharks who grabbed the ascendency when Nathan Stapleton raced across in the 47th minute margin out to 12.

A penalty 10 minute later by Carney would prove vital, as the Warriors sent a scare through the Sharks’ camp when Konrad Hurrell and Vatuvei for his second for the game, saw them come within a whisker of their 10th win of the season. 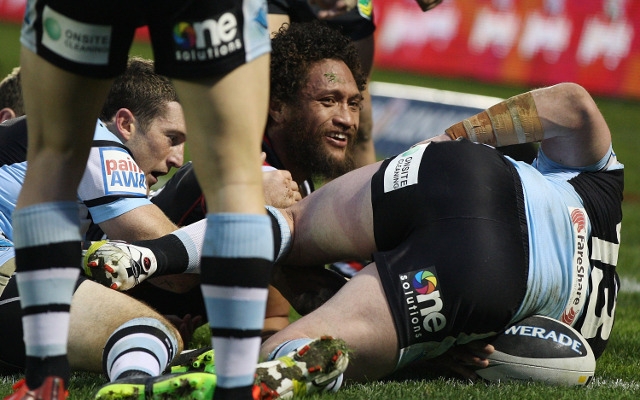 The Sharks could lose their grip on fifth place if the Canterbury Bulldogs beat the St George Illawarra Dragons on Sunday.

Whether they finish the round in fifth or sixth, the Sharks will take aim next weekend at the Newcastle Knights, who will be out to rebound from their tense 18-all draw against the Brisbane Broncos.

New Zealand are still on the cusp of, remarkably, playing in the finals, as they look to start another winning streak when they clash with the in-form Manly Sea Eagles at Brookvale Oval