Sharks opt not to risk skipper after sustaining knee injury last round.

The diagnosis might be better than first feared but the Cronulla Sharks are not taking any risks after leaving Paul Gallen out of the side to play the Wests Tigers at Allianz Stadium this weekend.

Gallen sent a scare through the Cronulla and New South Wales origin camps when he came off early in his side’s golden-point victory against Newcastle last weekend.

Initial estimates had Gallen spending up to six weeks on the sidelines, putting his spot with the New South Wales Origin side under severe doubt.

However, the medial strain has settled down and the bullocking backrower is expected to only miss between 1-2 weeks.

The Wests Tigers will be on the lookout for a new long-term option at halfback with new the club us set to release Jacob Miller so that he may join Hull in the  English Super League. 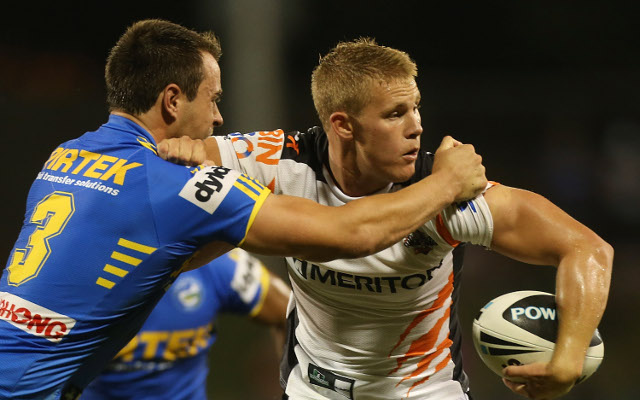 Miller was set to play a starring role with the Tigers this season with coach Mick Potter giving the 20-year-old the number seven jersey for the first round.

But the plan soon unraveled with the final nail being the side’s 26-0 loss to Manly in round four, with the young playmaker not seen in the top grade since.

Miller’s imminent departure could press up space for the club to promote from within or look elsewhere, with the Tigers rumored to be interested in signing  fringe Canberra halfback Sam Williams.

For this weekend’s clash against the Sharks, Potter has named Curtis Sironen to partner Benji Marshall in the halves.

Marshall will be looking for an improved showing this week after being rushed back into the side to face Canterbury Bulldogs after a toe injury, and as a result, we well below his best.

The Tigers will be desperate for a win against the Sharks, with injuries and poor form seeing them plummet to the bottom of the NRL ladder.