Dane Swan accumulated 31 possessions and Travis Cloke booted four goals for the winners, however, it was Scott Pendlebury who was voted best on field and awarded the Jason McCartney medal.
Collingwood’s depth was already challenged with the likes of Dale Thomas, Luke Ball and Alan Didak already missing, but the loss of Heath Shaw and Dayne Beams in the hours before the bounce only accentuated their issues.
But the Magpies responded brilliantly with many players staking their claim for selection in the coming weeks, even with returning stars in the mix.
North Melbourne launched a late challenge with three consecutive final quarter goals but it was too little, with Brent Macaffer icing the win in the final minute. 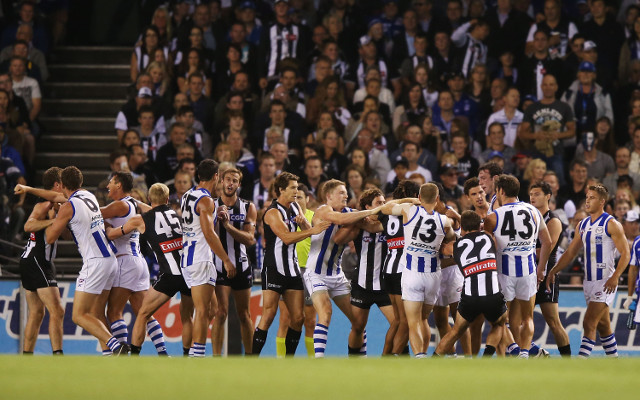 Kangaroos coach Brad Scott said his side were their own worst enemies at times, especially in giving up four goals to the Magpies in the third quarter.
“Collingwood counter-attacked us really well, they scored a hell of a lot from our mistakes,” Scott said.
“We were terrible with our ball use going forward , which is very unlike a lot of our guys.
“You just walk away from that game feeling bitterly disappointed because our ball use in the third quarter was terrible.”
Lindsay Thomas kicked four first-half goals for the Kangaroos and may find himself scrutinised by the AFL’s match review panel for off-the-ball contact against Ben Reid who suffered a cut mouth.
Collingwood coach Nathan Buckley labelled the hit as “ordinary” eliciting a quick response from Scott.
“Nathan Buckley should worry about his own team. A head clash is a head clash it happens in football,” he said.
“It’s not for me to comment on and it’s definitely not for Buckley to comment on.”
See the incident below: