For the first time in over 5 years, Alabama head coach Nick Saban enters the regular season without a definitive starting QB.

The Alabama Crimson Tide host the West Virginia Mountaineers in a week 1 battle of the SEC vs. the Big 12.

After being ranked No. 1 for the most of the season in 2013, Alabama lost the Iron Bowl to Auburn, in turn missing out on a chance to play for the SEC conference championship and later losing the Sugar Bowl to #11 Oklahoma.

Now ranked #2 in the nation to start the season, Alabama still has arguably the most talented defense and rushing tandem in college football, but the QB position is a competition. Head coach Nick Saban refused to name a starter between Jake Coker and Blake Sims and instead decided to split their time.

West Virginia on the other hand stumbled out the gate in 2013 after QB Geno Smith and WRs Tavon Austin and Stedman Bailey left for the NFL. The offense struggled to produce and the team finished the year with a 4-8 record – their first losing season since 2001. Head coach Dana Holgorsen could be on the hot seat if the team fails to return to above .500 in 2014.  Holgorsen named Clint Trickett the starting quarterback despite Trickett throwing seven touchdowns and seven interceptions in 2013. He’s also coming off shoulder surgery in the offseason, though Holgorsen says Trickett is ready to go.

Prediction: Alabama – The Crimson Tide have “rolled” over just about every juggernaut in the SEC and every other conference they’ve played against. The Mountaineers, who have been one of the worst defenses in the Big 12 in the last few years, hardly stand a chance against a team so efficient with ball control. 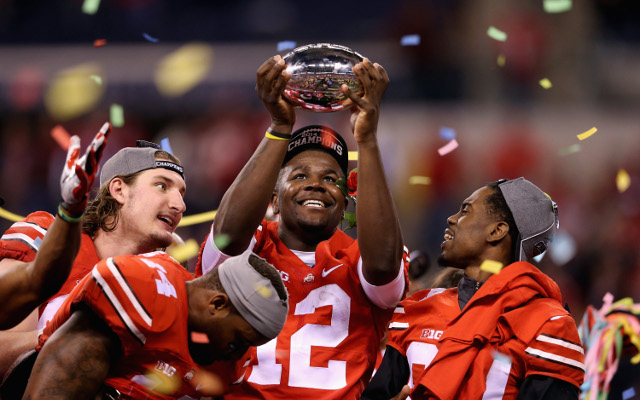