Colin Kaepernick threw for a 412 yards and three touchdowns to lead San Francisco to a 34-28 season-opening triumph over Green Bay on Sunday in an NFL playoff rematch.

Frank Gore’s one-yard touchdown gave the 49ers the lead late in the fourth quarter as San Francisco — who fell to Baltimore in the Super Bowl in February — launched their bid to return to the NFL’s championship spectacular on the first Sunday of the season.

Kaepernick completed 27-of-39 passes and became the first 49ers signal-caller to throw for more than 400 yards since Tim Rattay in 2004.

Anquan Boldin, acquired from Baltimore for a sixth-round pick in the offseason, emerged immediately as Kaepernick’s favorite target, catching 13 passes for 208 yards and a touchdown.

“We knew they were going to come in ready to play after what happened in the playoffs,” Boldin said. “We had to come out and match their intensity.”

Aaron Rodgers finished 21-of-37, passing for 333 yards, three touchdowns and one interception for the Packers, who won the NFC North division last year but were ousted from the playoffs by San Francisco. 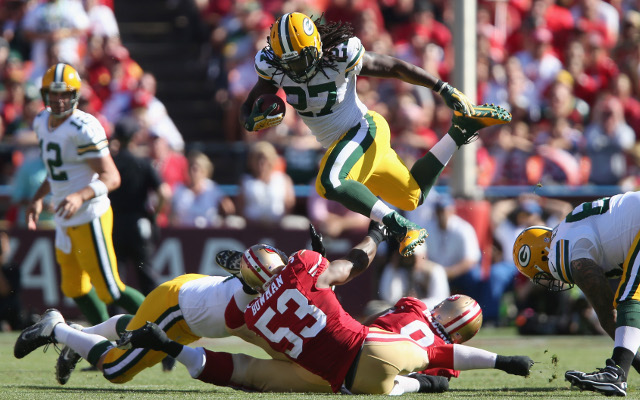