Christian Eriksen scored his first two goals of the season as Tottenham Hotspur twice came from behind to draw 2-2 with Swansea City in the Premier League this afternoon.

The set-piece specialist bamboozled Lukasz Fabianski for Tottenham’s first-half equaliser, and then beat the Swans keeper with this beauty into the top corner on 65 minutes.

Swansea had led through Andre Ayew’s header and a Harry Kane own goal, but Spurs rallied to earn a decent away point after their Europa League trip to Monaco on Thursday.

Eriksen’s exploits earned him a 9/10 in our Tottenham player ratings from the Liberty Stadium. Read below to see how the rest of Mauricio Pochettino’s side fared in Wales…

Beaten by an excellent Ayew header and caught completely unawares by the Kane own goal. Although Swansea had dominant spells, the Frenchman had little else of difficulty to do until a wonderful stoppage-time save from Federico Fernandez which secured Spurs their point.

Was involved in a titanic tussle with Jefferson Montero. When he was positioned well, the Spurs man fared okay, but he was too often dragged inside, leaving the Ecuadorian speedster with too much room, as for the first goal.

Tottenham had the joint-best defence in the league prior to kickoff and that is in part down to the shrewd addition of the Belgian. Spurs conceded twice today, but Alderweireld hardly put a foot wrong.

Handled Gomis competently, but should have got closer to Ayew for the Frenchman’s header. He and Ben Davies between them didn’t even make a challenge. Ridiculously booked for diving late on. 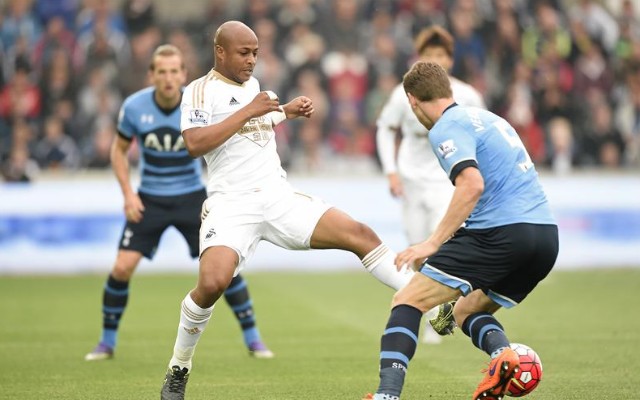 On his return to the club which he left to join Spurs, Davies struggled up against the strong and powerful Ayew throughout the first half. Delivered poorly on the couple of occasions that he got to the byline.