Chelsea are about to blow £500m on increasing the capacity of Stamford Bridge.

The renovation will take three years to complete, meaning the Blues will be forced to relocate for three seasons.

Chelsea’s two most likely temporary homes are two of London’s most famous national stadiums – Wembley and the home of rugby union, Twickenham.

The Telegraph newspaper conducted a poll to determine which venue would be the most popular with Chelsea fans.

Check out the results below.

Twickenham was understandably the favourite – presumably because it is just eight miles from Stamford Bridge by road and has a whopping capacity of 82,000.

Wembley, which can hold 90,000 fans, was narrowly beaten into second place, while nearby Craven Cottage – with a modest 25,700 capacity – was third.

The Emirates Stadium was surprisingly popular, considering its location and the rivalry between Chelsea and Arsenal. How many of those votes for the Emirates were genuine and how many were the result of bantering hijackers? 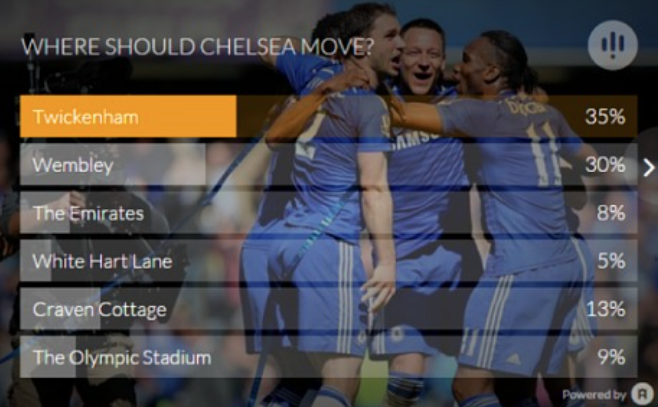