The teams drew the first leg 1-1 at Anfield…

Chelsea and Liverpool face each other in the second leg of their League Cup semi final on Tuesday night, and the Blues could make a lot of changes from the weekend – eager to progress to the final.

Up to nine players could be brought in to the side which lost 4-2 to Bradford City in the FA Cup fourth round…. 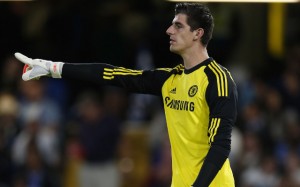 The Belgian should come back in for the second choice Petr Cech.

The defender has become one of the best right-backs in the Premier League over the last few seasons.

With Cesar Azpilicueta having played on Saturday, Luis will get a chance to prove himself against Liverpool.

Captain, leader, legend. There’s no chance he will be missing a game of this magnitude.

The England international will be one of the few to survive playing on the weekend.