The Blues are eyeing up Valdes.

In a surprise twist Chelsea have began talks with Barcelona over the possibility of bringing goalkeeper Victor Valdes to Stamford Bridge.

Reports in Spanish publication Sport suggest that manager Jose Mourinho is unsure of the capabilities of current No.1 Petr Cech and whilst Atletico Madrid stopper Thibuat Courtois is a Blues player, at 21-years-old the Portuguese coach thinks the Belgian needs to mature first. 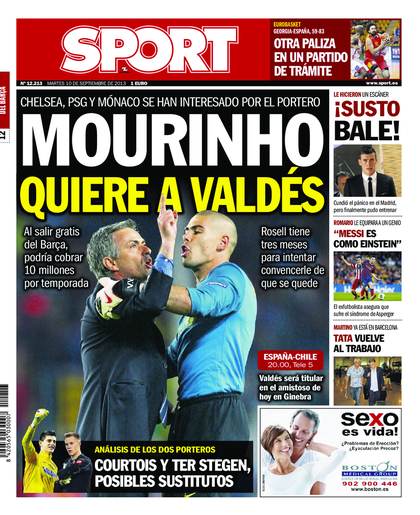 Valdes has entered the Spaniard’s last year of the player’s current contract at the Nou Camp and has already confirmed that the 31-year-old will not be extending that stay.

“I consider that my cycle as a Barcelona player will come to an end when my current contract expires in 2014,” the ‘keeper was quoted by BBC Sport.

“I could see myself playing in other leagues, getting to know something different and looking for different sources of motivation.”

Many fans at Stamford Bridge may see this as a strange decision from Mourinho, as despite the fact Valdes has a hugely decorated career, there are question marks over the stopper’s ability.

During 11 years in the Barca first team the Spain international has won La Liga six times, the Champions League on three occasions and was also part of the national squad that lifted both the World Cup in 2010 and the European Championship in 2012.

Yet these honours still don’t answer why Mourinho would want to oust Cech – seen by many as the best ‘keeper in the club’s history – from between the sticks in west London.

The Czech Republic international is the same age as Valdes and last term kept 14 clean-sheets in the Premier League and has been ever-present through the club’s success during the last nine years.

To date Cech has played 436 times for the side, winning three league titles, four FA Cups, the Europa League and saving two penalties in the Champions League final victory of 2012.