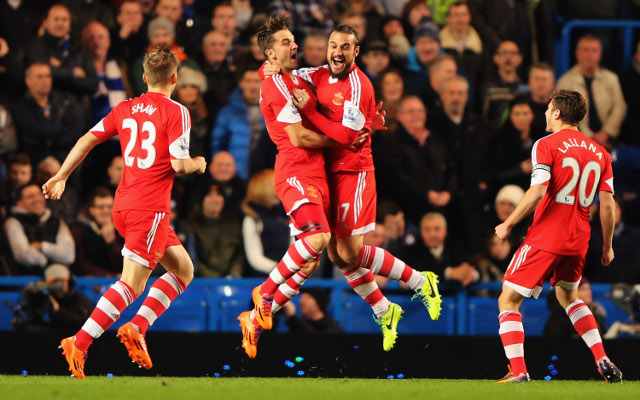 Artur Boruc – 6/10: Avoided any howlers like the one against Arsenal and was solid before a hand injury forced the Pole off.

Nathaniel Clyne – 6/10: Managed to keep Hazard quiet mostly although could not get forward because of the Belgium international.

Dejan Lovren – 6/10: Generally did well against a barrage of attacks but failed to perform well enough during set pieces.

Jose Fonte – 6/10: A similar story for Fonte, who was beaten to the ball late on as well for Ba’s goal.

Luke Shaw – 7/10: Another fine display from the youngster who worked tirelessly up and down the left flank.

Morgan Schneiderlin – 7/10: Looked comfortable in the middle again but was sacrificed for a more attacking style.

Victor Wanyama – 6/10: Played like Essien should have with a physical display in midfield.

Adam Lallana – 5/10: A quiet game for the captain who failed to influence any Southampton attacks.

James Ward-Prowse – 7/10: Looks like a real class act and has a great technique for crosses and through balls.

Jay Rodriguez – 6/10: Started explosively with a first minute goal, but Ivanovic shackled the winger after that.

Pablo Osvaldo – 4/10: Another disappointing performance from the unsettled striker.

Paulo Gazzaniga – 5/10: Came on for the injured Boruc and conceded twice, although neither were really the goalkeeper’s fault.

Steven Davis – 5/10: An uninspired display from the substitute.