St George Illawarra see their lead evaporate in front of their eyes.

The Canterbury Bulldogs have turned around a poor first half to storm home in the final 25 minutes to beat the St George Illawarra Dragons 39-20.

After finding themselves down by 12 points, the Bulldogs went on a try-scoring rampage to score the next 31, as the ran out big, but not convincing winners.

A sloppy start by thee Dragons gave the away side plenty of chances to get on the board and play from in front.

Trent Hodgkinson scored first for the Bulldogs in a messy build-up with several ricochets leading to the halfback sneaking across the line to make it 4-0.

The Dragons continued to be plagued by poor last tackle options, placing them under more pressure early as the Bulldogs went on the attack.

Josh Jackson bagged the second for the blue and whites as they pulled off a sharp set-play off the back of another set of six courtesy of a penalty.

Soft defence close to the line by the Dragons did not help their cause as they gave up an eight-point lead. 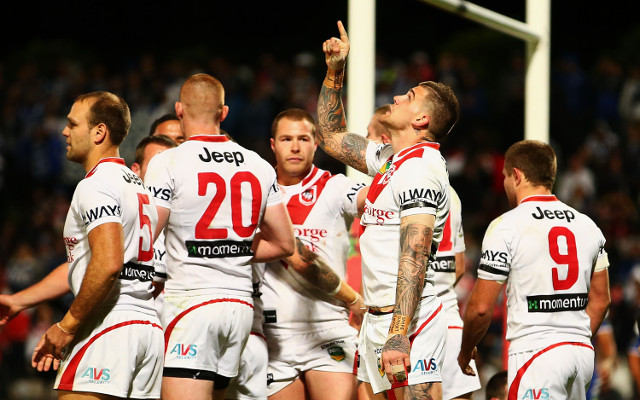 St George continued to shoot themselves in the foot when the restart by Josh Dugan sailed out on the full.

The home side got themselves on the board through Josh Dugan, whose scything attack close to the like broke
their run of 205 of without scoring a try.

The conversion was waved away from the boot of Dugan, as the Bulldogs kept a four-point lead with 13 minutes
left before half-time.

The wind again played a massive part as the Dragons let the restart bounce with three players unable to claw the ball back, resulting in a line drop-out.

Despite the home side playing a far from textbook brand of football, they are doing enough to hang in there in the shadows of half-time. 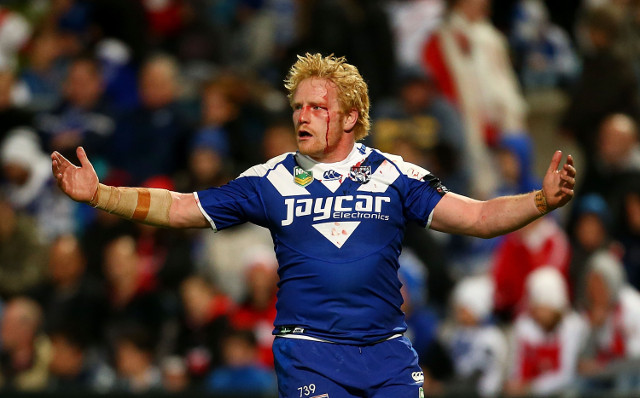 St George came alive late in the first half after their sluggish start, as they enjoyed the bulk of possession and territory, as Dugan pulled off a sensational individual play as he grubbered through and grounded the ball.

Dugan scored close enough to the posts to negate the strong wind as they led, amazingly, 10-8 at half-time.

Jason Nightingale gave the Dragons the perfect start to the second 40 after sensational hands from Dugan and Nathan Green, who passed off his fingertips, to complete the try assist to the winger.

The sensational team try saw the Dragons begin the second half with a flourish as they made the margin six.

Penalties continued to hurt the Bulldogs’ chances as they gave away their ninth penalty of the night in just the 47th minute, five more than their opponents. 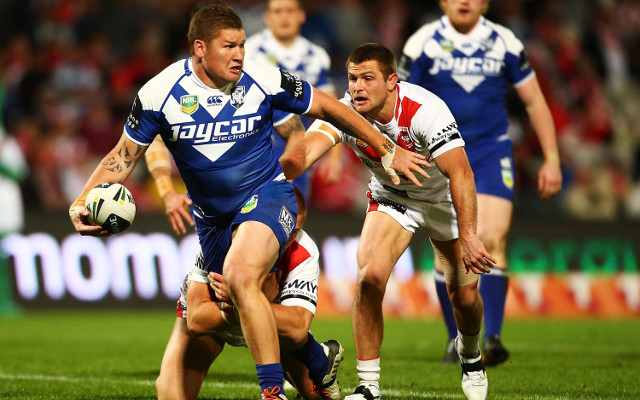 And off the back of a latest extra set, Daniel Vidot was the beneficiary of a good cut-out pass as he strolled
across the line untouched.

St George had scored the last four tries after conceding the first of the game, as the score became 20-8.

Tony Williams scored off another mistake by the Dragons on the kick-off, to keep the game alive.

Brett Morris went down hurt after copping a forearm in the throat from Krisnan Inu who attempted to fend him off in a tackle, but he shook off the blow and stayed on the field.

Amazingly after what looked to be a forward pass at one end of the field, the Bulldogs scored through Sam Kasiano
as the score became all locked up at 20 with 16 minutes left. 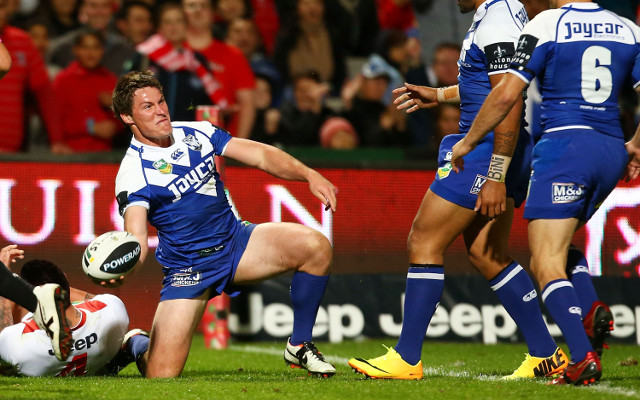 The incredible game took on another turn, as the Bulldogs scored off the restart set through Josh Morris to make the score 26-20.

Kasiano continued his massive impact on the game by scoring his second in quick succession as the wild momentum swing continued.

The Canterbury conversion sailed between the uprights as the away side took control of the clash with a 12-point lead with less than 20 minutes left in the game.

As if to help their chances the Bulldogs landed a penalty to all but assure them of the two competition points before Tony Williams capped the Jekyll and Hyde performance as the Bulldogs won by 19.