Depleted champions Melbourne Storm were held scoreless for the first time in almost five years as the Canterbury Bulldogs romped to a thumping 39-0 victory.

The Bulldogs revived their aspirations of a top-four finish with an eight-try blitz at ANZ Stadium, in a rematch of last season’s grand final, with New Zealand winger Sam Perrett scoring a hat-trick.

The reigning premiers were without State of Origin stars Cameron Smith, Billy Slater, Cooper Cronk and Ryan Hoffman as Storm went scoreless for the first time since their 2008 grand final defeat by Manly. 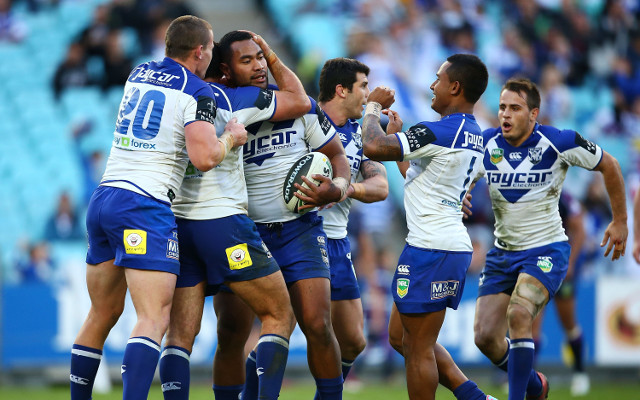 Only two other matches were played this weekend ahead of Wednesday’s third and deciding State of Origin match between New South Wales and Queensland in Sydney.

In a game light on stars due to Origin commitments and injuries, the Sharks stand-off proved the difference, with Carney having a hand in all three Cronulla tries and potting the decisive second-half drop goal to heap more pressure on Broncos coach Anthony Griffin.

Scrum-half Luke Walsh, unwanted by Penrith next season, continued to showcase just what the Panthers will be missing out on after guiding his side to a 17-10 win over Parramatta on Saturday.

While the victory against the last-placed Eels would have done little to frighten this year’s premiership contenders, the Panthers remain in the hunt for a finals berth, moving up to seventh following the win.

North Queensland Cowboys and Manly Sea Eagles complete the truncated round in Townsville on Monday.