Home side wins in a wet, arm-wrestle of a clash at the foot of the mountains.

The Penrith panthers have won their second game for 2014, after defeating the Canberra Raiders 12-6 in an tough but ugly performance at home.

A torrential downpour early in the first half meant any chance the game had of being an open-running spectacle went out the window, as handling errors riddled the game for both sides.

The game was held up for several minutes early in the contest, after Canberra second-rower Joel Edwards received treatment for  a heavy head-knock.

And in the current climate in the wake of Alex McKinnon’s spinal injury, the trainer’s paid special attention to making sure he was not hurt further.

Edwards was stretchered from the field in the seventh minute and the initial diagnosis was a heavy concussion and there was no threat of a neck or spine injury. 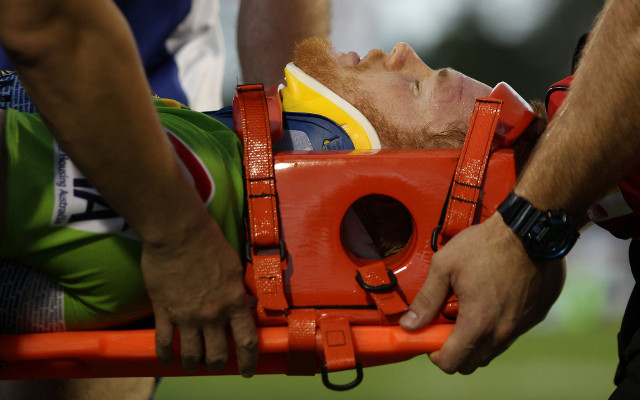 Sika Manu was placed in report for the Panthers for a crusher tackle in the 9th minute as the game continued to struggle to gain momentum.

After a mistake from Anthony Milford from a kick, the Panthers spread the ball to the right wing and Dallin Watene-Zelezniak crossed in the corner with Jarrod Croker pulling off a sensational defensive effort.

However, the try on debut for Watene-Zelezniak was rightly taken away the video referee and the scored stayed at nil-all.

Conditions then looked more like Townsville as a storm hit eh ground, with the handling start to be affected by the deluge.

Penrith dominated possession early in the game and set up camp inside the Raiders’ half, but they were unable to break through as the away side held on.

Watene-Zelezniak could not be denied the next time he got in sight of the try-line as he dived in corner to help his side to a 4-0 lead in the 18th minute. 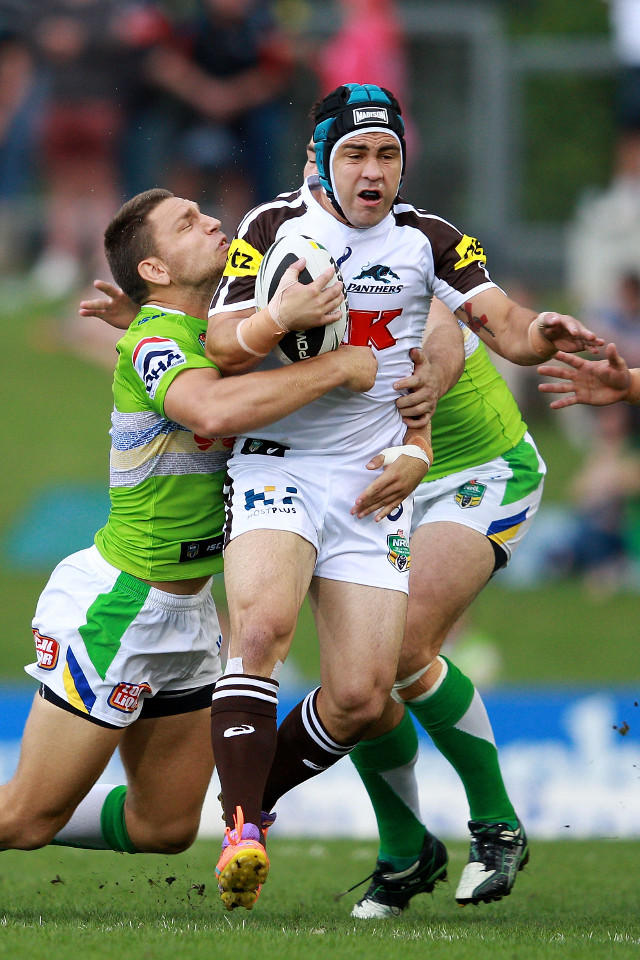 Sam McKendry then handed the ball over to the Raiders in the second tackle of the set off the restart,  in what was the first chance for Canberra to go on the attack.

After having a try turned down, the Panthers marched downfield quickly again thanks to a Jamie Soward 40/20 kick but the home side were unable to make the most of the attacking chance, with a knock-on taking the pressure off the Raiders.

Jamal Idris scored for the home side but a earlier knock-on from Josh Mansour was the four points taken away as the tight battle continued.

Tempers flared just before half-time as Penrith’s Lewis Brown objected to some attention in a tackle from Terry Campese.

And off the back of the penalty for the Panthers, Soward sent a well-weighted cut-out pass to Mansour to make the score 8-0 at half-time.
The error count hit 21 for both sides after just 50 minutes, with the Panthers unable to make the most of several attacking raids.

Canberra scored for the first time in the game when Milford burst through the line before finding Paul Vaughn slid across for his second try for the season to open the game back up.

Despite trivial analysis for a possible lead-up obstruction, the team in green saw the green light as Croker added the extras to make the score 8-6 in favour of the Panthers.

The Raiders started to roll down the field off the back off the try to Vaughan as they applied the pressure to the home side.

After another Canberra mistake coming out of their own half, the home side scored what could be the winning try as a excellent chip-kick from Peter Wallace found Watene-Zelezniak for his second try on debut.

Soward from the sideline missed to the left of the uprights, as the score moved to 12-6.

A knock-on from Matt Moylan from a bomb gave the Raiders a last chance to score as they forced two drop-outs from the home side, but a late intercept for Jamal Idris sealed the victory for the Panthers.

Canberra will look to bounce back next weekend when they host the Newcastle Knights, while the Panthers will look to start up a winning streak, when they do battle with South Sydney.